2021 Hungarian Grand Prix
The Hungaroring is a motor racing circuit in Mogyoród, less than 10 km northeast of Budapest, Hungary which has hosted the Hungarian Grand Prix since 1986. The tight, twisty circuit is a favourite amongst a few of the drivers due to its tricky, challenging nature, but others dislike the lack of overtaking.

Due to its dusty surface, the circuit is very heavy on tyres and drivers often have to stop more often. The circuit is also quite hard on brakes, as there are at least three heavy braking points on each lap (turns 1, 6 and 11). Also, since the circuit is used in the height of summer, reliability is often a problem – retirements are common due to cars overheating and engine failures.

During qualifying for the 2009 Hungarian Grand Prix at the circuit, Felipe Massa was left with a fractured skull and a brain injury after being hit in the head by a torsion spring at high speed, which had become detached from Rubens Barrichello's Honda ahead of him. The impact knocked Massa unconscious as he careered into the tire wall on the outside of turn 4. While the Brazilian driver eventually made a full recovery, he missed the remainder of the 2009 season.

The Hungaroring was opened in June 1986 after eight months of construction. It was built on the outskirts of Budapest, near the town of Mogyoród. Situated in a valley, which makes ideal viewing for spectators, the circuit was laid down in less time that any other modern Formula One circuit. The first race at the new circuit was the Drapál Memorial Trophy in March 1986, three months before its official opening. Later that year, the Hungaroring played host to the inaugural World Championship Hungarian Grand Prix (a previous Hungarian GP had taken place in 1936, as a non-championship event), an event which has been held at the circuit every year since.

The layout of the Hungaroring circuit has changed only very slightly since its opening in 1986: 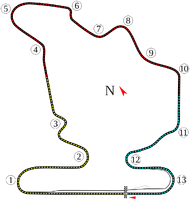 The original circuit featured a clockwise layout with 16 turns. From the start line leads a long downhill straight with a right-hand hairpin at the bottom. Another shorter straight leads to a long, tight left. Down another hill, the circuit was originally to turn gently right, but had to be diverted into a tight right-left-right chicane to avoid an artesian well. Next is a fast left over a blind crest leading into a slower, longer right hander. A heavy braking point for a tight right-left chicane is next, followed by a series of left-right-left-right esses. After a mid-length straight with a sharp right kink, the track leads downhill into a tight left hander. Finally, back up the hill is a tight right hairpin which leads back to the finish line. 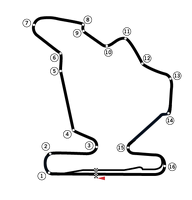 In 1989, the chicane built to avoid a spring was bypassed. The original planned route was established in its place. The circuit was otherwise unaltered. 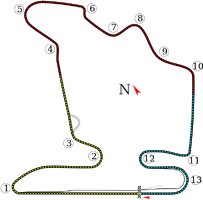 In 2003, the circuit was altered in two places in an attempt to improve overtaking. The run down to the first corner was lengthened and the corner itself was tightened to produce a heavier braking zone. Secondly, the back straight (turns 11-12) was lengthened and the sharp right hand kink turned into a 90-degree corner. As a result, turn 13 became much tighter. These attempts to improve overtaking proved ineffective, however, as overtaking barely improved at all.

The following Formula One World Championship events have been held at the Hungaroring circuit: