The Imola circuit is basically a road following a small river, the Santurno, with a return looping over a couple of small hills. At almost no point of the original layout was the track truly straight, with made it challenging and a favorite for both drivers and spectators.

The start/finish line and pits were on a very short straight, in between a flat-out sweeping right and a tiny left kink. After another very short straight, it enters a very wide radius 60 left, called Tamburello. This was followed by the longest straight on the track, roughly 1⁄2 km, before a short right kink, just before the tight left. 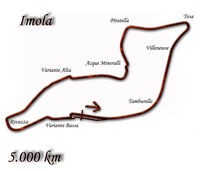 The original layout of the Imola circuit featured several flat-out sections connected by tight hairpins. At first, the run from Rivazza (map bottom left) and Tosa (top right) was flat out, as was the run from Acque Minerali to Rivazza. This meant that drivers reached very high speeds through Tamburello and Villeneuve. However, by 1980, the track was modified to slow cars slightly by adding a tight double-chicane between Rivazza and the Start/Finish line.

From the start line, the circuit ran through a quick left-hander (Tamburello) which was taken flat-out. From here, a short straight leads to a flat right-hander (Villeneuve) and tight left (Tosa). Following a short straight and a quick sweeping left hander lies Acque Minerali, a tight right-left-right chicane. Over a crest is the right-left chicane, Variante Alta. Then down the hill to the double left hand Rivazza turns. Then back up the hill for a quick right-left and slower left-right (Variante Bassa) and on to the finish line.

Over 14 years on this layout, numerous major accidents occurred. Many of these, including seperate terrifying crashes involving Nelson Piquet, Gerhard Berger and Michele Alboreto, occurred at the notorious Tamburello Curve. Tamburello was a flat-out left-hander with very little run-off and a concrete wall outside of the track.

In the Friday practice session of the 1994 San Marino Grand Prix, Rubens Barrichello was injured at Variante Bassa when his car was launched over the kerbs into a tyre barrier at high speed. On Saturday, after damaging his front wing on a previous lap, Roland Ratzenberger was killed when he failed to negotiate the Villeneuve corner and crashed heavily into the concrete wall at around 200mph, fatally fracturing his neck. The following day, during the race, three-time World Champion Ayrton Senna was also killed when his Williams-Renault went straight on at Tamburello and he hit the concrete wall at around 135mph, also fracturing his neck. In addition, a piece of Senna's suspension wishbone penetrated the driver's helmet, causing potentially fatal injuries.

In response to the accidents at the 1994 event, the FIA demanded that changes must be made to the circuit to improve the safety of the drivers. These changes were made ahead of the 1995 San Marino Grand Prix.

Numerous changes to the Imola circuit were made from the 1995 event onwards:

This layout of the Imola Circuit was used until 2006 after which the event was removed from the calendar.

Following the delayed start to the 2020 Formula One season due to the COVID-19 pandemic, resulting in a number of races postponed or canceled, it was announced on 24 July that Formula One would return to Imola as the 13th round of the season on 1 November.

The following is a list of Formula One World Championship events held at the Imola circuit:

"I think its a great race track. It's got elevation. It's almost like a road track. It is an artificial circuit but they have managed to combine the landscape of the Imola track very, very well indeed. I think it does provide a very enjoyable circuit for the grand prix circuit." John Watson. Eurosport. First Qualifying. 1990 San Marino Grand Prix.

"The spectator area here is nearly packed to capacity. Motor racing, in particular Ferrari racing is almost a religion to these people. Their enthusiasm adds a unique atmosphere to the first race of the European season." Matthew Lorenzo. Eurosport. Second Qualifying. 1990 San Marino Grand Prix.