Racing at the Melbourne Street Circuit started in the 1950s roughly on the plan of the modern circuit. Racing there ended when problems regarding racing in public parks came up. However, the circuit was rebuilt in 1996 with several changes: the direction of travel was reversed; the Jaguar Curve looped off and replaced with the Sports Centre Esses; the Chicane on the back stretch was axed in favour of a kink; the Clark Chicane was added; and the circuit's front straightaway was moved away from the lake in the infield. The race was plagued by environmental issues that reduced the usability for the park. Despite this, racing has thrived there. Albert Park is a well-liked circuit among drivers for its fast flowing layout, although the difficulty in passing remains a concern. 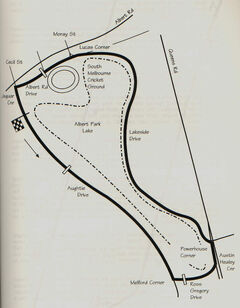 The first track was laid out around Lake Albert, a shallow former estuary that became a lake after the city of Melbourne filled in the path to the sea. The track was laid out in the parkland that surrounded the lake, running counter-clockwise and measuring 5.027 km/3.124 miles in length. The course started near the north end of a road called Aughtie Drive, and followed it for a gently winding 1.2km that was functionally a long straightaway. Near the south end of the lake, the course made a moderately tight 90° left (Melford Corner) onto Ross Gregory Drive. The cars went straight for 1⁄4km before a sweeping, 80° left (Austin Healey Corner) onto Lakeside Drive. After a short squirt the cars made a tight left-right at a roundabout (Powerhouse Corner, named for the nearby watering hole for the rowing crowd), then set off on the wide and gently bending drive. Over the course of almost 1.5 km, the cars made a gentle 70° left, followed by slight bend to the right, and after another 1⁄4km straight they took a very long, 45° right, taken flat out by the bravest souls. After a 1⁄2km straight, the cars slowed for a sweeping 110° left (Lucas Corner), and found themselves on Albert Road Drive. Following this for about 2⁄3km, with a quick left bend in the middle, the cars reached the slowest turn on the course. This was a 100° sharp left (Jaguar Corner), just before the start/finish line. The pits were of a temporary nature, just past start/finish on driver's left. The races were quite popular, but the organizers had issues with local opposition, crowd control, safety and damage to the park. After the 1958 events, the races ceased.

1996 brought the F1 Grand Prix to Melbourne, at the expense of Adelaide. The new organizers started with the same basic layout as existed in the 1950s, but with considerable updating, and having made great efforts to get the local populace on their side.

They started with reversing the direction of travel. The old start/finish and pit locations were completely unsuitable, so an entirely new section was created from scratch. The old Melford Corner was now renamed Stewart and led onto a 1⁄4km straight, part of the old Aughtie Drive. The cars then hit a very tight 110° left (named Senna) and had an even shorter straight before making a sweeping 90° right (Prost) onto the new start/finish straight. Pit in is also on driver's right between Senna and Prost.

The new start/finish straight is 1⁄2km long, cresting a slight rise towards the middle. Pit out is about 3⁄4 of the way down, making for some entertaining merging going into the first corner, especially when you consider that this is the only realistic passing spot on the track. This corner is a tight 75° right (Jones) leading immediately onto a faster sweeping 75° left (Brabham), rejoining the old Aughtie Drive. (The old section of road survives as a pedestrian/bicycle path.)

Just before the old pits, the modern track makes a tight 120° right (called Sports Centre, for the massive gymnasium and recreation complex to driver's left), deviating from the old track for some distance. Partly because of the very close barriers, this corner has been the site of many a failed overtaking move, and the expense of some bumps and bruises, and a great deal of carbon fiber. The surviving cars squirt up a short straight to a wider 75° left (Hellas, for the football team that plays nearby). As this corner is in a parking lot, runoff and barriers are not a concern here.

Another short straight leads to a fast, 45° right (Whiteford) and puts the cars onto the modern Albert Road Drive. Almost 1⁄2km of acceleration ends with a tight, 90° right (called Marina, which is odd, because the actual marina is some distance away) which puts the cars on Lakeshore Drive, and back on the old footprint. The old Lucas corner is now named Lauda, and partway along the straight after Lauda the cars traverse another tight right (Clark) and sweeping left (Fittipaldi) chicane, before entering the long sweeping left that is still unnamed after all these years.

The old gentle left/right after the Powerhouse chicane has been tightened somewhat, and named Waite. The following straight has a gentle right kink (Hill) and Powerhouse chicane is now gone (but the pub survives!). The old Austin Healey corner hos been renamed Ascari, but is almost identical to the original, allowing for safety mods. The short following straight has been straightened out slightly, and ends with Stewart corner.

Despite criticism for lack of passing opportunities, the track is unchanged for the 25 year run of the race here. The only variations are curb heights and pit road adjustments.

On 21 March 2018, the start/finish straight was named the Walker Straight, in honour of the late ex-Australian Grand Prix promoter Ron Walker.[1]

The organizers announced plans to analyze the track following the 2020 race, with the objective of promoting more competitive racing and exciting racing. 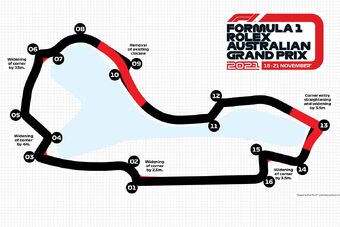 According to a video posted by the official F1 Australian Grand Prix account on YouTube, the following changes have been made to the Albert Park Circuit:[2]