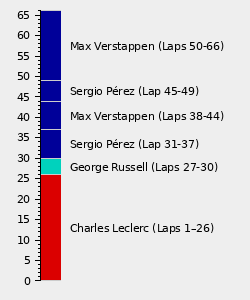 The 2022 Spanish Grand Prix (officially the Formula 1 Pirelli Gran Premio De España 2022) was the sixth race of the 2022 FIA Formula One World Championship, held at the Circuit de Barcelona-Catalunya on the weekend of May 20 and May 22 2022.

This race marked the return of F1 to the Circuit de Barcelona-Catalunya since the pre-season track session in February. The Spanish fans were rooting for Fernando Alonso and Carlos Sainz, Jr. in particular since these guys proudly represent the Spanish flag as they race around the world.

Prior to the race weekend, it was announced that two drivers would make their practice debuts: 2019 Formula 2 and recent Formula E champion Nyck de Vries making his appearance in Williams, and Red Bull Junior driver Juri Vips driving in Red Bull. Robert Kubica, reserve driver for Alfa Romeo, also made an appearance in FP1; due to issues with the Alfa Romeo C42 during pre-season testing, Kubica's running in the car has been limited this season. Due to these three drivers taking part in FP1, permanent starters Alex Albon, Sergio Pérez, and Guanyu Zhou did not participate in FP1.

The full entry list for the 2022 Spanish Grand Prix is outlined below:

The full practice results for the 2022 Spanish Grand Prix are outlined below:

The full qualifying results for the 2022 Spanish Grand Prix are outlined below:

The full results for the 2022 Spanish Grand Prix are outlined below:

2nd one-two of Red Bull of this season.

Charles Leclerc and Ferrari lost their leads in both the Drivers' and Constructors' Championships due to Leclerc's DNF. Red Bull's one-two finish catapaulted the Austrian-based outfit and their star driver, Max Verstappen, to the top of the standings.