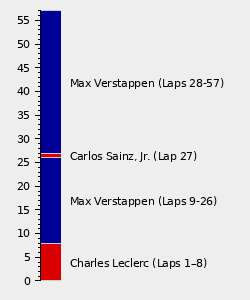 Talks for a race in Miami began as far back as 2017, with various impressions for the circuit held within the city as a street course. On 2021, a ten-year deal was reached to host the Miami Grand Prix beginning in 2022. The Miami Grand Prix would take place around the Hard Rock Stadium, home to the NFL team, the Miami Dolphins.

This race will be the inaugural race held in Miami at the newly constructed Miami International Autodrome staged around the Hard Rock Stadium in Miami Gardens, Florida. It will be one of two Grands Prix held in the United States this season; the other being the 2022 United States Grand Prix held at the Circuit of the Americas in Austin, Texas.

Racing at a new circuit is more challenging for drivers and teams since they do not have previous data to rely on for their strategies. Moreover, a new track implies a new track surface, so there may be imperfections that have not been addressed (e.g. bump[1] at Eau Rouge that was seen at the 2021 Belgian Grand Prix). A few circuits this season will have a new tarmac such as the resurfaced Circuit de Spa-Francorchamps and the redesigned Albert Park Circuit.

Since Australia, the FIA have enforced rules on drivers wearing jewelry during race events. Some believed it was a move targeted to Hamilton, who was often seen wearing jewelry in race events. Hamilton, who previously insisted that there were a few body jewelry parts that could not be removed, called the decision a "backwards" move while sporting with various jewelry on his body during the pre-race media conference, adding that he would be willing to sign a waiver to take on some responsibility away from the FIA. In response, the FIA has granted the seven-time champion an exemption for the race weekend as well as the next race weekend at Barcelona.

The full entry list for the 2022 Miami Grand Prix is outlined below:

Leclerc led the opening session of the inaugural Miami weekend from Russell and Verstappen in the closing stage of the session, with the latter suffering overheating issues despite being third fastest. The session was not without incidents, with drivers spinning and losing control learning the new course, and Bottas causing the first red flag when he lost the rear at Turns 7-8 and hence did not take part in the next session.

Russell showed that Mercedes' latest updates had seemingly taken effect by posting the overall fastest time on Friday, with Leclerc and Perez behind, and Hamilton about two-tenths behind his teammate in fourth. Verstappen meanwhile failed to set a time after having hydraulic issues moments after leaving the pits, despite having his gearbox changed from his brush in FP1. Sainz caused the second red flag of the weekend by crashing at Turn 12, with the next red flag coming after Latifi stopped on-track having suspected one of his wheels was not attached properly.

The full practice results for the 2022 Miami Grand Prix are outlined below:

Knocked out in the first round of qualifying was Kevin Magnussen, Guanyu Zhou, and both Williams drivers. Esteban Ocon did not partake in qualifying since his car was not repaired on time.

In the closing stages of the final qualifying round, the Ferrari duo of Charles Leclerc and Carlos Sainz, Jr. secured a one-two start for the Sunday race, which pushed down Max Verstappen to third.

The full qualifying results for the 2022 Miami Grand Prix are outlined below:

In the first corner at the start, Verstappen overtook Sainz for second place and closed in on Leclerc, whom he passed for the lead on lap 9, as Leclerc struggled with the medium compound tyres.[8][9] The race was interrupted on lap 41, as Norris's rear right tyre made contact with Gasly's front left, triggering a virtual safety car and then a safety car for five laps. Verstappen was pressured from Leclerc at the restart, and defended his position to take the win. On lap 52, his teammate Pérez attempted to overtake Sainz into turn 1 but made a mistake and locked up. Vettel and Schumacher collided at lap 53, but no action was taken.[10] Leclerc and Sainz finished second and third, respectively, while Pérez, who had suffered engine issues that cost him about 30 horsepower,[11] and Russell made up the top five.[12] After the race, Alonso was given two separate five-second penalties.[13] Magnussen had two separate incidents following the restart with Stroll, retiring on the last lap; he was classified 16th as he completed more than 90% of the race distance.[14]

The full results for the 2022 Miami Grand Prix are outlined below:

Following this race, the top five drivers retain their positions in the Drivers' World Championship. Lewis Hamilton gained a place over Lando Norris as Norris had to retire his car after a collision with Pierre Gasly. Alexander Albon picked up two positions with a 9th-place finish after moving up from 10th due to the two 5-second penalties Alonso received during the race. Lance Stroll gained a place over Guanyu Zhou due to Zhou's early retirement from the race, which nullified any possibility for Zhou to score points.