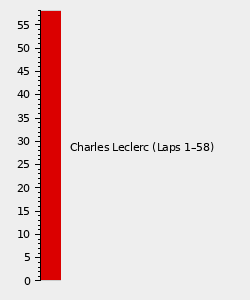 The 2022 Australian Grand Prix (officially the Formula 1 Heineken Australian Grand Prix 2022) was the third race of the 2022 FIA Formula One World Championship, held at the Albert Park Circuit on the weekend of 8-10 April 2022. It was the first race held since 2019, as the event was not held for two straight years due to the COVID-19 pandemic.

Pirelli had announced a unique tyre compound selection for this Grand Prix. Usually, there is a consecutive sequence of compounds (i.e. C2, C3, C4), but this time they went with a step up between the medium and soft compounds (i.e. C2, C3, C5). Their press release explained the new track surface at Albert Park Circuit was factored into their decision. Pirelli expected the new asphault to provide low levels of grip due to being "green" and slippery, so they went with the softest compound (C5) to provide teams with an option to maximize grip. This was the first time we saw the C5 compounds being used at a race in 2022.[1]

The current season's running of the race marked the first time F1 returned to Australia, following the race's cancelation for two straight years due to the COVID-19 pandemic. During its absence from the calendar, Albert Park underwent a major overhaul to improve on-track action. According to the track map, there will be 4 DRS activation zones with 2 DRS detection zones. The first detection point is 45m (~148 feet) after turn 6 and the second is 90m (~295 ft) before turn 13.

The Australian Open, a tennis tournament held earlier in January, saw controversy when ATP Singles #1 Novak Djoković was unable to participate and defend his title after his visa was canceled by the Australian government and he was subsequently deported from the country despite being granted a medical exemption from the double vaccination requirement by the government. Australian Grand Prix CEO, Andrew Westacott, however, assured that the controversy would not reoccur for the F1 event as all parties, including the federal/state governments and Formula 1, are clear on the entry requirements for both Australia and the Albert Park venue.

The full entry list for the 2022 Australian Grand Prix is outlined below:

Sainz went fastest in FP1, followed by Leclerc and Pérez. A red flag was brought out to clear debris from the track caused by bits from Pérez's Red Bull RB18. There was a breakdown for Vettel that brought out the second red flag and fire extinguishers to put out the fire coming from the rear of his Aston Martin AMR22.[3]

Following the session, the stewards summoned 4 drivers (Zhou, Sainz, Stroll and Magnussen) to respond to their alleged impediments during FP1; Sainz was the only driver to receive a reprimand. Vettel, meanwhile, was summoned for "unauthorized use of a scooter on the track". Vettel had borrowed a marshal's scooter to return to the paddock since his car was stranded due to a mechanical failure. If he had returned to the paddock using the less flashy emergency access roads, there would have been no rules breached, but the internet meme machine wouldn't have much to rave about. Subsequently, Vettel was fined €5,000 for breaching the regulations.

Leclerc was overall fastest, followed by Verstappen and then Sainz. Vettel's issue from FP1 meant that he was unable to take part in the session. After FP2, more drivers were summoned by the stewards for allegations of impeding another driver. Hamilton and Sainz were summoned for allegedly impeding Stroll at turn 13; the stewards decided that no further action was needed. Tsunoda was summoned for allegedly impeding Sainz at turn 2; Tsunoda was given a reprimand (his second of the season).[4]

Most drivers used the softest compound this session, the C5s. Even though tyre grip levels were at the highest, Vettel still managed to bring out the red flag when he put his car into the barrier at Turn 10. After the session resumed, Verstappen spun out at Turn 13, ruining his flying lap time. Ultimately, Norris came out on top, followed by Leclerc then Pérez. [5]

The full practice results for the 2022 Australian Grand Prix are outlined below:

With minutes remaining in the session, a heavy accident took place involving Stroll and Latifi. Having traded positions, Latifi set about getting back ahead when Stroll turned in, causing his countryman to clip his front right and spin and crash heavily, red-flagging the session. The session resumed with two minutes remaining, enough for Vettel to set a time in one lap as others hardly improved. Eliminated were Albon, Magnussen, Vettel, Latifi and Stroll. Stroll was later handed a three-place grid penalty for the collision, but he was already due to start from last. Albon, who stopped on the track when the session ended, was excluded from qualifying results as his team failed to provide the required fuel sample.[9]

A brief yellow flag was shown when Russell went deep into Turn 11, causing a brief yellow. Perez set the overall fastest time of the session, but is being investigated for failing to slow down during the yellow flags. Eliminated from the session were Gasly, Bottas, Tsunoda, Zhou and Schumacher, Bottas ending his 103-qualifying streak of reaching Q3.[9]

Verstappen set the fastest time halfway into the session, but was beaten by his teammate by a thousandths of a second due to locking up at the penultimate turn. Halfway into the session, Alonso had set the fastest Sector 2 before he missed a gear change at Turn 11 and crashed into the barriers, red-flagging the session once again; Alonso came on the radio to his engineer and claimed he lost hydraulics. As the session came to a close, Verstappen was initially fastest, until Leclerc ultimately set the overall fastest time. Having missed setting a time when the red flag was shown, Sainz could only muster 9th after having issues starting on the restart and fluffing his lap. Both Mercedes drivers made use of the early restart to drive an extra warm-up lap to qualify in the third row.[9]

The full qualifying results for the 2022 Australian Grand Prix are outlined below:

The day before the race, Niels Wittich, one of the two race directors appointed for the Grand Prix, reminded drivers of a new safety car rule stating that a driver must stay behind the car ahead during restarts and not by the side, as Max Verstappen did at both the 2021 Abu Dhabi Grand Prix and the 2022 Saudi Arabian Grand Prix.[12] Before the race, Red Bull made several changes to Verstappen's car without penalty, as did Nicholas Latifi, who was forced to change several gearbox elements due to his crash with Lance Stroll during qualifying,[13] and Carlos Sainz Jr. had his wheel changed.[14] Sainz had anti-stall issues at the start,[15] and dropped to 14th by lap 2;[16] in an attempt to make a comeback, the hard-tyred Sainz spun off at turn 10 trying to pass Haas's Mick Schumacher,[17] causing his retirement,[18] which brought out the safety car.[19] After a brief struggle with keeping the tyres warm at the restart, Leclerc maintained the lead ahead of Verstappen, while Pérez, who was overtaken by Lewis Hamilton at the start,[19] retook second through DRS at turn 3 by lap 10.[19] During the safety-car period, the hard-tyred Stroll pitted twice, first to change tyres to medium sets (as the regulations state you must use two different tyre compounds) and then for the hardest compound in an attempt to finish the race without having to pit again.[20]

On lap 24, an accident for Sebastian Vettel brought out the safety car.[19] Russell, who had not yet pitted unlike most of the grid,[16][21] used the opportunity to make a pit stop, gaining time over his competitors due to pitting under safety car, rejoining the race in third behind Leclerc,[19] who had build a lead and had pitted before the safety car,[22] and Verstappen, who locked up at turn 11 on lap 12 and suffered graining on his left-front tyre.[16] When racing resumed, Verstappen attempted to overtake Leclerc, who picked up old rubber on turn 16,[23] but Leclerc held position into turn 1 and built another lead.[16][24] Pérez came out fifth after the safety car but was back in third by lap 37.[19] On lap 39, Verstappen retired due to an unspecified issue causing a fire on his car.[19][20] The virtual safety car was brought out, ending on lap 40.[16] Alonso was ultimately the biggest loser in the race, pitting for mediums during the VSC period but the tires did not work well, hence pitting for the third time and ending up 17th and last among the classified finishers. Alexander Albon meanwhile was able to keep his hard compounds for 57 laps, before having to make his compulsory pit stop,[25] and finished 10th for Williams's first point of the season.[26] On lap 58 Leclerc set the fastest lap again, as he won the race, while Pérez and Russell completed the podium.[16] The result moved Russell into second place in the Drivers' Championship,[27] while Leclerc extended his lead to 34 points.[28] Leclerc's grand slam was the first for a Ferrari driver since Alonso achieved such a feat at the 2010 Singapore Grand Prix.[29]

The full results for the 2022 Australian Grand Prix are outlined below:

Leclerc pulled further clear from the lead at 34 points from nearest challenger Russell, while Verstappen's second retirement in three races meant he fell three places down the leaderboard. Mercedes meanwhile made the most points gains among the teams in the race at 27 points, allowing them to extend their gap from Red Bull by 9 points despite being slower than them. McLaren's decent haul allowed them to get to fourth in the standings, and with Albon's point finish, this left Aston Martin as the only team yet to score points in the season.