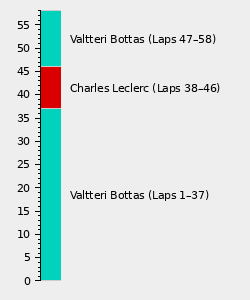 The 2021 Turkish Grand Prix (officially the Formula 1 Rolex Turkish Grand Prix 2021) was the 16th race of the 2021 FIA Formula One World Championship, held at Istanbul Park in Istanbul, Turkey between October 8 and October 10 2021.

Lewis Hamilton was the fastest in qualifying, but started in 11th with a grid penalty after taking a new engine component. His team-mate Valtteri Bottas thus led from pole position to victory in a wet race, taking his first win since the 2020 Russian Grand Prix. Max Verstappen finished second reclaiming the championship lead with Sergio Pérez in third.

The Turkish Grand Prix, which was last held in 2011, was originally raced as a replacement event for the 2020 season due to the COVID-19 pandemic. On April 28, it was announced that the Canadian Grand Prix had been canceled, and hence the Turkish race returned to the calendar as its replacement.[1]. However, on May 14, ongoing travel restrictions meant that the race was canceled again before it was held, leading to another calendar reshuffle[2]. Following the cancelation of the Singapore Grand Prix, however, the Turkish Grand Prix was announced to be reinstated into the calendar, replacing the slot.[3]

Ahead of the race, Red Bull and AlphaTauri have both announced to be running in a one-off livery as a tribute to engine suppliers Honda who are in their final season. Ferrari's Carlos Sainz Jr was also announced to be starting from the back of the grid after taking a new power unit, the same specification that was equipped on his team-mate's car in the previous round. It was also announced that the crew for the Medical Car had been replaced by Formula E safety car driver Bruno Correia and Medical Delegate Dr Bruno Franceschini as the original crew of Alan van der Merwe and his co-driver Ian Roberts have tested positive for COVID-19.

The full entry list for the 2021 Turkish Grand Prix is outlined below:

With the threat of rain arriving as FP3 earlier was wet, all cars went out simultaneously as the session began. Eliminated from the session were Ricciardo, Latifi, Giovinazzi, Raikkonen and Mazepin, with Hamilton fastest in the session. For the second time in his career, and for the first time since the 2021 French Grand Prix, Schumacher progressed into Q2.

Russell ran wide at the last corner on his final flying lap, and he joined Vettel, Ocon, Schumacher and Sainz out of Q2, with Sainz already due to start from last from an engine penalty. Leclerc, who spun before starting his flying lap, was able to qualify into the final session after getting slipstream from his team-mate on the backstraight.

Hamilton set the fastest time before Bottas nipped it by two hundredths of a second, with Verstappen shuffling behind the Mercedes duo. As the remainder waited in the pits, Hamilton had the track to himself, setting the overall fastest time of the session. With several drivers hardly improving their times at the end, Hamilton was unquestionably the fastest driver in qualifying, though with his engine penalty applied he started the race from 11th, promoting Bottas into pole position with Verstappen starting alongside him. Completing the top ten were Leclerc, Gasly, Alonso, Perez, Norris, Stroll and Tsunoda, who qualified on medium tires as opposed to the rest on softs.

The full qualifying results for the 2021 Turkish Grand Prix are outlined below:

The full results for the 2021 Turkish Grand Prix are outlined below:

Verstappen's podium meant that he reclaimed the championship lead once again from Hamilton leading by six points, though Bottas' hat-trick performance ensured that Mercedes extended their lead slightly from Red Bull in the constructors' standings. The Finn's efforts also meant that he greatly extended his advantage from Norris for third in the drivers' standings, with Perez closing into Norris with a 10-point difference.

In the constructors' standings, Ferrari closed the gap to McLaren to 7.5 points with Leclerc and Sainz' results combined.