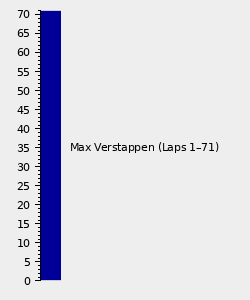 The 2021 Styrian Grand Prix, (officially the Formula 1 BWT Großer Preis der Steiermark 2021) was the eighth round of the 2021 FIA Formula One World Championship, held at the Red Bull Ring in Spielberg, Styria, Austria on 27 June 2021.

Max Verstappen took his first back-to-back pole-to-win in the race, with Lewis Hamilton a distant second, but reduced his championship loss disadvantage by setting the fastest lap of the race. Valtteri Bottas, after starting fifth due to a grid penalty from spinning in FP2, managed to finish in third after resisting a late charge from Sergio Pérez in the closing laps.

At the start, Charles Leclerc damaged his front wing after making contact with Pierre Gasly, the AlphaTauri Frenchman breaking his rear suspension as a result, forcing him to retire, but not without coming in contact with Antonio Giovinazzi and Nicholas Latifi while retiring. George Russell, who started in 10th, had been in 8th place when he was forced to retire with a power unit issue. Leclerc meanwhile would ultimately charge on to finish in 7th after being nearly last on the first lap, earning Driver of the Day for his actions.

The Styrian Grand Prix was originally intended to be a one-off race for the 2020 season, but following the current season's calendar changes, which saw the Canadian and the replacement Turkish Grands Prix canceled, the Austrian double-header round made its appearance in the calendar once again.[1] The W Series championship, which had joined F1 as its feeder series in 2021 and is set to begin its first round since its cancelation on the previous year due to the pandemic, was originally planned to begin at Paul Ricard. The rescheduling of the F1 calendar meant that the current W Series season's opening race will be taking place at Austria as the double-header.[2]

Heading into the 8th round, Max Verstappen extended his lead ahead of Lewis Hamilton to 12 points. Red Bull also maintained their advantage ahead of Mercedes, while McLaren regained 3rd in the standings after Ferrari dropped back during the previous race and failed to finish in the points.

Ahead of the race Alfa Romeo announced that they will be running a special livery to celebrate 111 years of the marque.[3]

The full entry list for the 2021 Styrian Grand Prix is outlined below:

Eliminated out of Q1 were Latifi, Ocon, Raikkonen, Schumacher and Mazepin.

Russell missed out into entering Q3 by only 0.008 seconds. He joined Sainz, Ricciardo, Vettel and Giovinazzi in being eliminated out of Q2.

Hamilton made minor errors on his final flying lap, but nevertheless, would start second alongside Verstappen due to team-mate Bottas' grid penalty.

The full qualifying results for the 2021 Styrian Grand Prix are outlined below:

The full results for the 2021 Styrian Grand Prix are outlined below:

While Verstappen extended his championship lead from Hamilton to 18 points, Hamilton's fastest lap effort and Mercedes' double podium meant that Red Bull only extended their advantage ahead of Mercedes by 3 points in the constructors' standings. Ferrari's double-points finish meant that they narrowed the gap to McLaren to 12 points.