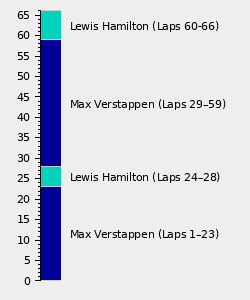 The 2021 Spanish Grand Prix (officially the Formula 1 Aramco Gran Premio De España 2021) was the fourth race of the 2021 FIA Formula One World Championship, held at the Circuit de Barcelona-Catalunya in Barcelona, Spain between May 7 and May 9 2021.

Lewis Hamilton took his 100th career pole position, but was passed by Max Verstappen at the start. On a different strategy, Hamilton was able to pass Verstappen into the lead with seven laps remaining. Verstappen was left to make his second stop in a bid to take fastest lap from third-place finisher Valtteri Bottas, which he did. Yuki Tsunoda was the only retirement of the race, his engine having failed on the sixth lap and triggering a safety car period. Tsunoda's team-mate Pierre Gasly came to finish in the last points position starting from 12th after overcoming an early penalty for being out of position of his starting grid, while home racers Carlos Sainz, Jr. and Fernando Alonso finished in 7th and 17th respectively.

Ahead of the current season, it was revealed that work had been done on the circuit to remodel the 10th turn of the track. The turn has been modified into a more gently arcing left-hander, with the added benefit of providing more run-off area at the corner, thus improving safety for the racers.[1]

Heading into the fourth round, Lewis Hamilton led Max Verstappen by 8 championship points. Hamilton had so far won two races compared to one from Verstappen, who had already lost chances of beating Hamilton in two races due to track limits rules.

The full entry list for the 2021 Spanish Grand Prix is outlined below:

Qualifying was delayed by 10 minutes due to barrier repair works. Norris took a surprise fastest time at the end of Q1, but the main shocker was Tsunoda, who along with Raikkonen, Schumacher, Latifi and Mazepin are out of Q1.

Verstappen set the overall fastest time while out in Q2 were Stroll, Gasly, Vettel, Giovinazzi and Russell.

Hamilton set the fastest time at the start of the final session but with him, Verstappen and Bottas failing to improve their times on the final run, he claimed his career 100th pole. Perez spun on his first flying lap and could only go 8th fastest on his final run, while best of the rest went to Leclerc in 4th with Ocon a career-best starting 5th.

The full qualifying results for the 2021 Spanish Grand Prix are outlined below:

The full results for the 2021 Spanish Grand Prix are outlined below:

Hamilton extended his lead ahead of Verstappen to 14 points, while Bottas' podium finish enabled him to take third on the standings from Norris, the only position change in the drivers' standings. Likewise, there were no changes in positions to the constructors' standings. Mercedes extended their lead from Red Bull to 29 points, while Leclerc's superb finish ensured Ferrari scored to within 5 points of McLaren.