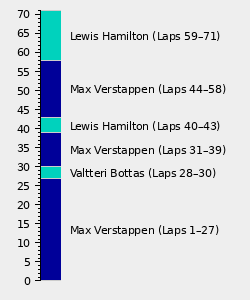 The 2021 São Paulo Grand Prix Grand Prix (officially the Formula 1 Heineken Grande Prêmio de São Paulo 2021) was the 19th race of the 2021 Formula One Season, held between November 12 and November 14 2021 at the Autódromo José Carlos Pace in São Paulo, Brazil.

The full entry list for the 2021 São Paulo Grand Prix is outlined below:

Hamilton topped Q1 with the fastest lap around the Interlagos track, which had some track limit and DRS detection zone changes[2] for this season. Russell was outqualified by his teammate Latifi for this first time this season. Stroll missed out on advancing to Q2 by just 65 ms.

Ocon, Vettel, Tsunoda, and both drivers from Alfa Romeo-Ferrari were knocked out in Q2.

All four leading teams in the Contructors' Championship made it into Q3. Hamilton was the fastest in Q3, followed by Verstappen, Bottas and Pérez. This line-up will make for an exciting Sprint Qualifying race on Saturday, which will settle the final grid for Sunday's Grand Prix.

Post-qualifying, Hamilton was excluded from the qualifying results due to an infringement with the DRS, while Verstappen was fined €50,000 for a parc ferme infringement.

The full qualifying results for the 2021 São Paulo Grand Prix are outlined below:

Bottas got a better start than Verstappen, with the Dutchman running wide off Turn 4 and ceding the position to Sainz. Verstappen then took back the position from Sainz and charged back to Bottas, but the Finn managed to hold him off and win the sprint, thereby setting pole position for the race, with Verstappen in second and Sainz third. After being excluded from qualifying, Hamilton recovered from the back to finish in 5th, but would be starting the race in 10th due to engine penalties. Raikkonen dropped down to 18th ahead of the Haas drivers after being tagged into a spin by his team-mate Giovinazzi.

The full results for the 2021 São Paulo Grand Prix Sprint Qualifying are outlined below:

Verstappen got ahead of Bottas at the start, while Norris went off at Turn 1 after collecting a puncture from contact with Sainz, limping for one lap back to the pits. Bottas and several drivers went off at Turn 4, surrendering second place to Perez. Hamilton meanwhile, managed to gain up to 7th place at the end of the first lap, passing Vettel for sixth at the start of the next. By the fourth lap, Hamilton was already in fourth behind Bottas, who let his team-mate through at the start of the fifth lap. A while later, the safety car was deployed, due to debris on the first corners as a result from Tsunoda damaging his front wing attempting to overtake Stroll on the inside, the Japanese driver given a 10-second time penalty for the incident.

The race resumed on Lap 10, with both Red Bulls pulling away and Hamilton in pursuit. A VSC was later called after there was debris on the track, this time due to a collision from Schumacher and Raikkonen which resulted a broken front wing for the German. As the VSC ended, Verstappen continued to pull clear, while Hamilton was able to pass Perez on the outside of Turn 1 on Lap 18, but the Mexican retook the position on the back straight with DRS. Hamilton repeated the maneuver on the following lap, and this time made the move stick, but by now was 3.7 seconds behind Verstappen.

Hamilton was the first of the leaders to stop on Lap 26, while Verstappen followed a lap later, but despite Hamilton behind Ricciardo after his stop, he reduced the gap to his rival to 2.6 seconds. A second VSC was called on Lap 30, due to debris shedding from Stroll's car following his incident from Tsunoda. Bottas pitted under VSC conditions, and was able to get ahead of Perez.

With the lead gap fluctuating, Verstappen made his second stop on Lap 40, while Hamilton stopped three laps later, and once again began to close into his rival. On Lap 48, Hamilton had just got ahead of Verstappen at the back straight when Verstappen braked late, sending both drivers into the run-off at Turn 4. Ten laps later, Hamilton was once again on close range behind Verstappen, but could not quite get past as Verstappen weaved on the back straight. Hamilton finally managed to sail into the lead on the following lap, with Verstappen given a black and white flag for the weaving. Stroll was the first retirement of the race, stopping his car in the garage on Lap 48 after it was too damaged to continue. Ricciardo also retired two laps later.

Hamilton would be left untroubled for the remainder of the race, pulling clear of Verstappen and won by 10 seconds, with his team-mate Bottas in third having reduced the gap to Verstappen but ran out of laps to claim second place. Finishing out of the podium but in the points were Perez (who pitted for the fastest lap), Leclerc, Sainz, Gasly, Ocon, Alonso and Norris.

During the in-lap after the race's conclusion, Hamilton removed his seatbelt, which the stewards later gave him a fine of €5,000 for infringing on a technical regulation.

The full results for the 2021 São Paulo Grand Prix are outlined below: