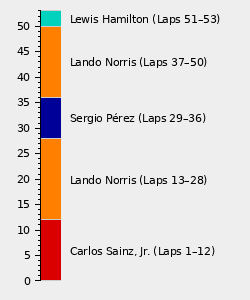 In a drying qualifying, Lando Norris took a surprise maiden pole position ahead of Carlos Sainz, Jr. and George Russell, while Lewis Hamilton qualified fourth after failing to improve. Hamilton however took his 100th race victory as Norris, who had been leading, dropped down to 7th in the closing stages when rain fell, with Max Verstappen, who started from last with an engine penalty, coming in second and Sainz in third.

The full entry list for the 2021 Russian Grand Prix is outlined below:

After FP3 was canceled due to heavy rain, the weather improved as the qualifying session began. Hamilton topped the session with Raikkonen, Schumacher, Giovinazzi, Mazepin and Verstappen, who was due to start with an engine penalty and therefore only completed an installation lap, eliminated from Q1.

Hamilton once again topped Q2 with Russell advancing into Q3 for the third time in the season, while eliminated from Q2 were Vettel, Gasly, Tsunoda, Latifi and Leclerc, both of whom would also be starting from the back from engine penalties.

Hamilton set the fastest time on intermediate tires as the track began to dry up, leading to drivers changing into dries for the final half of the session. Hamilton collided with the barrier at pit entry and therefore, lost time to warm up his tires after having his front wing changed, and spinning on his final flying lap, ending up in fourth while Norris took a surprise maiden pole position ahead of Sainz and Russell.

The full qualifying results for the 2021 Russian Grand Prix are outlined below:

At the start, which was dry, Sainz took the lead from Norris coming out of Turn 2, with Hamilton dropping to 7th place behind Ricciardo, Stroll and Alonso, with Stroll getting to fourth behind Russell. Among those starting from the back, Leclerc made the best start into 13th. Hamilton passed Alonso on the next lap, with Sainz and Norris pulling away as Russell held a train of cars behind him. Verstappen and Bottas meanwhile, started carving up the field, though Verstappen had a better recovery drive.

After briefly dropping back, Norris began to close into Sainz, and passed him on the 13th lap. Stroll was the first of the runners to pit on Lap 12, with Russell following suit on the following lap but failed to undercut him. Sainz then pitted, and rejoined in front of Stroll. Ricciardo, who was trailed by Hamilton and Perez after those in front of them had pitted, stopped on Lap 22 but a relatively slow stop left him out of podium contention. Hamilton, now with clear air, started to close the gap to his countryman Norris. He then pitted on Lap 26, at the same time as Vettel and Verstappen. Norris then pitted two laps later and emerged in front of Gasly, thus handing Perez into the lead with Alonso and Leclerc behind, all three of whom are on hard tires and are yet to stop. Hamilton soon was 8 seconds behind Norris after passing driver by driver, and began to carve into Norris, though biding his time as both of them had matching paces. Schumacher meanwhile had his first career retirement when he came into the pits on Lap 32 due to a hydraulic issue.

With almost ten laps remaining, rain began to fall. As rain intensified in the next few laps, with drivers losing control and spinning, the majority started pitting for intermediate tires, while the leaders still stayed out for several laps, Norris keeping the lead despite running off a few times. Stroll meanwhile forced his Aston Martin team-mate Vettel into the wall, before tipping Gasly into a spin, damaging his front wing and sliding into the barriers, yet continued with little damage. With three laps remaining, Hamilton pitted for intermediates, as Norris, despite calls to change for intermediates, kept staying out, and he eventually paid the price when he ran deep at Turn 5 and dropped down, allowing Hamilton through.

Hamilton ultimately led the last tours without incident and came home to take his 100th race victory, becoming the first driver to reach the centurious record, at the same time maintaining Mercedes' 100% win record at Sochi, by nearly a minute from Verstappen, who made a podium finish after starting from last, with Sainz following behind. Bottas finished an impressive fifth place behind Ricciardo, having been one of the first drivers to make the switch to inters. Completing the points-finishing positions were Alonso, Norris, Raikkonen, Perez and Russell, Perez dropping down from the front as he was among those the last to swap to intermediates.

Post-race, Norris was given a reprimand for a pit entry violation, while Stroll was given a 10-second post-race penalty for the collision with Gasly.

The full results for the 2021 Russian Grand Prix are outlined below:

Hamilton's win predictably saw him reclaiming the drivers' championship lead, though by two points due to Verstappen's second place finish. Their team-mates' finishing positions meant that Mercedes extended their advantage ahead of Red Bull by 15 points to 33 points. Bottas managed to extend his gap from Norris to 12 points after Norris' late-race heartbreak, with Sainz getting ahead of his team-mate as the Monegasque dropped out of the points positions. Raikkonen came to within one point of Latifi with his and Alfa Romeo's best finish of the season so far.

Sainz' podium finish meant that McLaren only extended the gap from Ferrari by four points, while the difference between Williams and Alfa Romeo was reduced to 16 points.