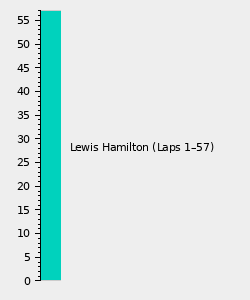 The 2021 Qatar Grand Prix (officially the Formula 1 Ooredoo Qatar Grand Prix 2021) was the 20th race of the 2021 FIA Formula One World Championship, held at the Losail International Circuit between November 19 and November 21 2021. It was the inaugural F1 race held in Qatar.

The Losail International Circuit, originally host as the Qatar Grand Prix for MotoGP since 2004, was announced to be replacing the TBC slot due to the canceled 2021 Australian Grand Prix on September 30 2021, marking it the first time Qatar hosted Formula One. A 10-year deal to host the race beginning 2023 was also signed.

The full entry list for the 2021 Qatar Grand Prix is outlined below:

Valtteri Bottas was quickest, followed by Pierre Gasly and Max Verstappen. Nikita Mazepin had to sit out due to a severely damage chassis.

The full practice results for the 2021 Qatar Grand Prix are outlined below:

Eliminated from the session were Raikkonen, Latifi, Giovinazzi, Schumacher and Mazepin, who was nearly four seconds off having not driven much in FPs 2 and 3.

Perez, Stroll, Leclerc, Ricciardo and Russell were all eliminated in the session.

Having set the fastest time early on, Hamilton managed to improve again to the fastest time overall of the session, just before Gasly, who was fourth fastest, ran over the kerbs exiting Turn 15 and receiving a puncture and broken front wing. Verstappen and Bottas stayed second and third fastest as yellow flags were deployed for a slowing Gasly, meaning Hamilton secured his first pole position since the 2021 Hungarian Grand Prix, with the gap of 0.455 the largest margin of the season.

The full qualifying results for the 2021 Qatar Grand Prix are outlined below:

Just hours before the race, Verstappen, Bottas and Sainz were summoned to the stewards for yellow flag infractions during qualifying. As a result, Verstappen was handed a five-place grid penalty, dropping from second to seventh, while Bottas received a three-place penalty, dropping down to sixth. Sainz meanwhile was cleared of any wrongdoing.

Hamilton led out of the start, with Alonso passing Gasly a few corners later while Verstappen leapt to fourth. Bottas however dropped down to eleventh. As the race progressed, Hamilton gradually began to extend his advantage from the field, while Verstappen made his way to second in a couple of laps. Perez and Bottas also progressed. Verstappen dropped from Hamilton as he reported minor wing damage.

Verstappen stopped on Lap 17, and Hamilton followed a lap later and retained the lead, though lost a bit of time encountering traffic and Verstappen's pace on newer tires. At this stage, Bottas, Norris and both Ferraris are yet to stop, with Perez and Alonso passing Leclerc after the Monegasque locked up at Turn 1.

Drama began on the 33rd lap when Bottas suddenly suffered a puncture on the front left tire, limping back to the pits, dropping down and rejoining out of the points. Hamilton, Verstappen and Perez then made their second stops, trading fastest laps with each other as Perez recovered again, passing Stroll and Ocon to reclaim the final podium spot from Alonso, who was voicing concerns on his tires running on a long stint.

More puncture incidents then followed, with Russell being the first of these to receive the puncture, then Norris, and then Latifi. Unlike Russell, who made it back to the pits to have his tires replaced, Latifi was forced to stop on the side of the track to retire, just as Norris pitted from 5th with the similar issue, dropping down to 10th. Bottas meanwhile had retired earlier following damage received from his puncture.

Perez' charge on Alonso was all but over when the VSC was called in the closing laps to recover Latifi's car. Verstappen pitted for soft tires in an attempt to set the fastest lap. Hamilton meanwhile, completed the final tour without incident and won the race, with Verstappen a distance behind in second and Alonso in third ahead of Perez. Completing in the points were Ocon, Stroll, Sainz, Leclerc, Norris and Vettel.

The full results for the 2021 Qatar Grand Prix are outlined below:

With two races remaining, Hamilton closed the gap to Verstappen to eight points. Bottas' retirement meant that Red Bull closed into Mercedes to 5 points in the constructor's championship battle. Alonso's podium meant that Alpine took off from AlphaTauri with a 25-point difference, as neither driver of the latter team scored. Ferrari also extended their advantage from McLaren by 8 points after yet another poor showing from McLaren.