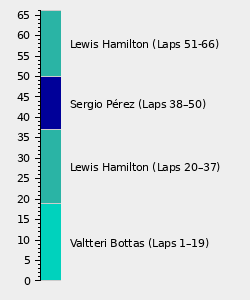 The 2021 Portuguese Grand Prix (officially the Formula 1 Heineken Grande Prémio De Portugal 2021) was the third race of the 2021 FIA Formula One World Championship, staged at the Algarve International Circuit in Portimao, Algarve, Portugal between April 30 and May 2 2021.

Valtteri Bottas took pole position for the race, but it was Lewis Hamilton who won the race for the second year in a row, despite losing out to Max Verstappen after an early Safety Car restart due to Kimi Räikkönen retiring from front wing damage after clipping his Alfa Romeo team-mate Antonio Giovinazzi. He managed to repass him and eventually gain the lead on the 20th lap. A long first stint for Verstappen's team-mate Sergio Pérez meant that he took the lead after Hamilton pitted, but then conceded the lead to Hamilton after getting blocked by the Haas of Nikita Mazepin a few laps prior, the latter receiving a post-race penalty as a result, while Hamilton went on to score his 97th race win. Bottas was passed by Verstappen after his stop and fell behind momentarily after suffering a brief exhaust sensor issue, but nevertheless, took the fastest lap award, with Verstappen's fastest lap time deleted for track limits violations. Daniel Ricciardo managed to race to 9th place after starting from 16th in McLaren.

Heading into the weekend Lewis Hamilton held a one-point lead ahead of Max Verstappen, who won the previous round but Hamilton's fastest lap ensured he still had the championship lead entering the next round.

On the day of the previous round it was also announced that the Miami Grand Prix is confirmed to be the latest addition to F1 starting the next season, with a new 10-year deal signed. The race will take place at the Hard Rock Stadium, which is home to the Miami Dolphins baseball team and has hosted the Super Bowl six times and numerous music concerts.[1]

On the Monday before the race weekend, all teams have unanimously agreed to trial a sprint race qualifying format. The format for sprint qualifying will be as follows:[2]

It was immediately announced that the Silverstone Circuit will be the first location to trial the new sprint weekend format[3].

The full entry list for the 2021 Portuguese Grand Prix is outlined below:

The biggest shocker in qualifying was Ricciardo. He alongside Stroll, Latifi, Schumacher and Mazepin were out of Q1, the first time since the 2019 Japanese Grand Prix that he was eliminated in that period.

Russell nearly made it to Q3 by five hundredths of a second. He was out alongside Giovinazzi, Alonso, Tsunoda and Raikkonen. Vettel progressed to Q3 for the first time since the 2020 British Grand Prix.

Verstappen initially set the quickest time for pole, but was deleted for track limits violations. Valtteri Bottas thus took his 17th career pole by seven thousandths of a second ahead of Hamilton, despite both not improving their runs on medium tires.

The full qualifying results for the 2021 Portuguese Grand Prix are outlined below:

The full results for the 2021 Portuguese Grand Prix are outlined below:

Hamilton extended his championship lead ahead of Verstappen to 8 points after the race, leading the drivers' championship standings for the 123rd race, whilst their team-mates' points finishing ensured they moved up the order of the drivers standings. Both Alpine drivers were able to depose Tsunoda to the bottom among the points scorers, and also move up to 5th in the constructors' standings.