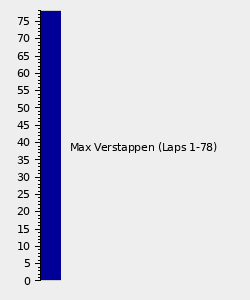 The 2021 Monaco Grand Prix (officially the Formula 1 Grand Prix de Monaco 2021) was the fifth race of the 2021 FIA Formula One World Championship, held at the Circuit de Monaco in Monte-Carlo, Monaco between May 20 and May 23 2021.

Charles Leclerc took pole position in his home race, but was unable to start after his car encountered a driveshaft failure, leaving Max Verstappen to dominate and win the race, leading the drivers championship for the first time in his career. Carlos Sainz, Jr. and Lando Norris joined Verstappen on the podium, as Mercedes had a struggling weekend; Lewis Hamilton qualifying in 7th and unable to progress but set the fastest lap as a compensation, with Valtteri Bottas retiring after a wheel gun failure caused a wheel to unable to be detached. Sebastian Vettel took home his first points of the season in 5th.

The previous season's Monaco Grand Prix was canceled due to the COVID-19 pandemic, marking it the first time since 1954 that Monaco wasn't raced as a world championship event. On the provisional calendar released on November 10, 2020[1], the Monaco Grand Prix has since been reinstated on the calendar, with the Historic Grand Prix and the Formula E events having took place, the latter sports event using the full course for the first time.

Heading into the fifth round Lewis Hamilton led Max Verstappen in the Drivers' Championship standings by 14 points, with both having their best starts to their own seasons.

Ahead of the race weekend it was announced that McLaren would be running a one-off Gulf-themed livery for the race, reminiscent of the McLaren F1 GTR that raced in the same livery in the 1997 24 Hours of Le Mans, and the livery used in the Le Mans-winning Fords in the 1960s[2]. It was also confirmed that driver Lando Norris had signed a multi-year contract remaining with the team[3]. Williams also ran a special livery to commemorate their 750th race entry.

The full entry list for the 2021 Monaco Grand Prix is outlined below:

Out in Q1 were Tsunoda, Alonso, Latifi, Mazepin and Schumacher, who crashed near the end of FP3, the resulting damage so great that he was unable to participate in qualifying.

Eliminated in Q2 were Ocon, Ricciardo, Stroll, Raikkonen and Russell.

Leclerc set the fastest time at the start of the session but with seconds remaining, Leclerc crashed coming out of the Swimming Pool chicane, ending the session early and denying others from improving their times. Verstappen and Bottas were next to line up behind Charles, while Hamilton struggled and qualified 7th fastest.

The full qualifying results for the 2021 Monaco Grand Prix are outlined below:

The full results for the 2021 Monaco Grand Prix are outlined below:

Verstappen's win and the results meant that he led the drivers' championship standings for the first time in his career, while Red Bull ended Mercedes' streak of leading the constructors' championship, the first time they led since 2013. Hamilton's fastest lap effort ensured he only trailed Verstappen by 4 points after Monaco. A few standing changes included Norris regaining third from Bottas, Perez moving up with his 4th-place finish, Sainz deposing Ricciardo a position and so did Gasly upon countryman Ocon. Vettel and Giovinazzi scored their first points of the season, with the latter's a compensation to Raikkonen's penalty at Imola that denied the team's maiden points of the season. Aston Martin jumped to 5th in the constructors' standings after their first double-points finish.