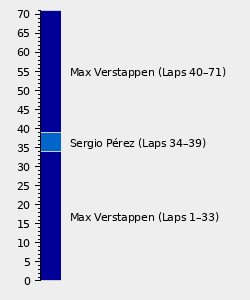 The 2021 Mexico City Grand Prix (officially the Formula 1 Gran Premio De La Ciudad De México 2021) was the 18th race of the 2021 FIA Formula One World Championship, to be held at Autódromo Hermanos Rodríguez in Mexico City, Mexico between November 5 and November 7 2021.

The full entry list for the 2021 Mexico City Grand Prix is outlined below:

Stroll crashed his car at the Peraltada, causing a red flag, during which Raikkonen momentarily cut into the pit lane from the track before rejoining the track. When the session was resumed, Bottas set the overall fastest time, with Alonso, Latifi, Schumacher, Mazepin and Stroll out of Q1. Sainz momentarily had an engine issue but progressed into the next session, while both Williams drivers were involved in a pit exit incident with the Haas drivers.

Hamilton topped the session with Vettel, Raikkonen, Russell, Giovinazzi and Ocon out of Q2. Russell however would start in 16th after his gearbox was replaced as his previous one developed problems during FP2.

Both Red Bulls set the early pace, with Perez going fastest, followed by Verstappen, before Bottas put in the fastest time of the session and Hamilton slotting behind the Finn one hundredths behind. On their final runs, Perez was caught out by Tsunoda, who had run off-track at Turn 10 in which the Mexican followed suit, the incident prompting Verstappen, who was close behind to lose pace in the final run. As both Mercedes drivers did not improve either, Bottas secured his 19th career pole position, with Hamilton making it a Mercedes front row lockout, a surprising result given how Red Bull had been traditionally performing better on the circuit.

The full qualifying results for the 2021 Mexico City Grand Prix are outlined below:

The full results for the 2021 Mexico City Grand Prix are outlined below:

With a victory at the 2021 Mexico City Grand Prix, Max Verstappen increases his lead once again. Right behind him is Lewis Hamilton who took second place. The two front-runners are neck and neck, but Max Verstappen is slowly, but surely expanding his lead, with only 4 races remaining in the season.

Kimi Räikkönen moves up to 16th place, which pushes Nicholas Latifi down one place.