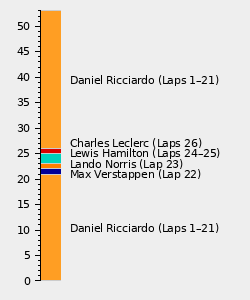 The 2021 Italian Grand Prix (officially the Formula 1 Heineken Gran Premio D'Italia 2021) was the 14th race of the 2021 FIA Formula One World Championship, held at the Autodromo Nazionale Monza between September 10 and September 12 2021. The race weekend was the second weekend to trial the new sprint qualifying format.

Daniel Ricciardo gave McLaren's first victory since 2012 with Lando Norris and Valtteri Bottas finishing behind, the latter starting from last due to engine penalties, as both title rivals Lewis Hamilton and Max Verstappen both collided and retired.

In the build-up to the race a number of driver changes were announced. On Monday after the Dutch Grand Prix weekend, Valtteri Bottas was announced to be joining Alfa Romeo in a multi-year deal beginning 2022, replacing the outgoing Kimi Räikkönen. George Russell thus took over Bottas' seat at Mercedes, while Alexander Albon, who was dropped from Red Bull at the end of 2020 was announced to make his return to F1 joining Williams alongside Nicholas Latifi.

Robert Kubica was announced to be driving for Alfa Romeo for the weekend, as Räikkönen was yet to recover from COVID-19.

The full entry list for the 2021 Italian Grand Prix is outlined below:

Hamilton topped Q1 with Russell initially joining Latifi, Schumacher, Kubica and Mazepin in out of Q1, only for him to be promoted into Q2 after Tsunoda's lap time was deleted for track limits violation.

Hamilton topped Q2 again, despite being involved in a near-miss with Vettel as all drivers left to begin their final runs. Eliminated in Q2 were Vettel, Stroll, Alonso, Ocon and Russell. Aston Martin and Alpine were subsequently fined €5,000 each for unsafe releases.

Despite dipping his wheels into the Roggia gravel on his first run, Bottas nevertheless improved to set the overall fastest time, with Hamilton almost a hundredths of a second behind and Verstappen in third.

The full qualifying results for the 2021 Italian Grand Prix are outlined below:

Bottas led away at the start, while Hamilton started poorly, dropping behind Verstappen, the McLarens and Gasly, but was promoted a place when Gasly broke his front wing after making contact with Ricciardo, and eventually crashing at Curva Grande. Tsunoda also tipped Kubica into a spin, requiring him to change his front wing. Perez meanwhile was forced off wide by Stroll and cut the chicane ahead of him, before being ordered to give the position back. Despite his efforts, Hamilton wasn't able to clear the McLarens, and wound up 5th as his team-mate won the sprint ahead of Verstappen, nevertheless the Dutchman gaining pole as Bottas had to start from the back of the grid due to an engine penalty. Ricciardo would thus line up 2nd on the front row, with Norris behind alongside Hamilton.

The full results for the 2021 Italian Grand Prix Sprint Qualifying are outlined below:

Before the race, Gasly reported problems en route to the grid. His AlphaTauri team-mate Tsunoda was faring the same, being wheeled into the garage before the race started, therefore failing to start.

As the lights went out, Ricciardo got the jump on Verstappen, as Hamilton managed to get past Norris. He attempted to pass Verstappen at the Roggia chicane, only to be forced off wide, running over the kerbs and dropping back behind Norris. At the same time, Giovinazzi was forced off-wide by Leclerc, before being collected and spun by Sainz, getting a 5-second penalty as a result. The debris left behind by Giovinazzi triggered a brief virtual safety car. Gasly's problem worsened on the first lap and he eventually retired. As the McLaren drivers duly kept the title rivals at bay, Bottas, on the other hand, was in a charge from last. Ocon banged wheels with Vettel heading into the Roggia chicane, the latest race winner handed a 5-second time penalty as a result.

On the 22nd lap, Ricciardo was the first one to pit. Verstappen followed two laps later, but a slow stop put him down to 9th place, at the same time Hamilton had just managed to clear Norris. Hamilton later pitted, and just as he emerged in between Norris and Verstappen, both went side by side into the Rettifilo chicane, Verstappen forced off slightly wide before he was mounted onto the Mercedes and ultimately putting them both into the gravel trap and retiring, the Dutchman being handed a 3-place grid penalty at the next round as a result. The safety car was called out as a result, allowing drivers who are yet to stop do so.

Ricciardo led away at the restart, with Leclerc behind before he was passed by Norris at the Curva Grande. He then ceded the position to Perez, the Mexican cutting the Roggia chicane doing so and receiving a 5-second time penalty as a result, and then later to Bottas. Schumacher meanwhile made contact with his countryman Vettel at the restart, before being tagged by Mazepin into a spin, resulting in a 5-second penalty for the Russian. Mazepin would then retire with an issue at the Ascari chicane.

Ricciardo would then be left untroubled, hence cruising to the line to take his first victory since the 2018 Monaco Grand Prix, taking the fastest lap on the final lap as well ahead of Norris. Bottas managed to claim the final podium place after Perez' penalty was applied dropping him to 5th behind Leclerc, having been trying to make a pass until the finish. Completing in the points were Sainz, Stroll, Alonso, Russell and Ocon, with Stroll being investigated for failing to respect yellow flags.

The full results for the 2021 Italian Grand Prix Main Race are outlined below:

Verstappen could only extend the championship advantage to 5 points from Hamilton due to his finish in the sprint qualifying yet failing to finish the race along with his title rival. Bottas' sprint qualifying victory as well as his charge from last to the podium ensured that he retained third and maintained the difference ahead of Norris and further from Perez in the battle for third, with Ricciardo's victory allowing him to get ahead of Gasly who failed to finish as well.

As for the constructors' standings, Bottas' efforts meant that Mercedes extended their lead ahead of Red Bull to 18 points, with McLaren taking back third once again from their 1-2 finish.