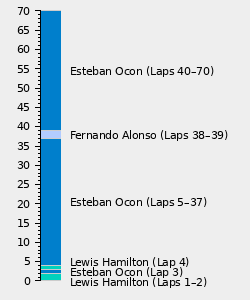 The 2021 Hungarian Grand Prix, (officially the Formula 1 Rolex Magyar Nagydíj 2021) was the eleventh round of the 2021 FIA Formula One World Championship, held at the Hungaroring in Mogyoród, Hungary on August 1 2021.

Lewis Hamilton took pole position and as he led out of Turn 1 at the start, chaos unfolded behind him due to the wet conditions. Valtteri Bottas collided into Lando Norris, who in turn collided into Max Verstappen, before collecting Sergio Pérez as well. Charles Leclerc tangled Daniel Ricciardo, due to being punted by Lance Stroll, the. With many debris strewn on the track, the red flag was called out.

At the red flag restart, everyone except Hamilton dived to change into dry tires as the track was drying. Hamilton took off alone from the grid and pitted after the lights went out, dropping to last, but recovered to finish third, battling Fernando Alonso in the closing stages. Esteban Ocon meanwhile led until the checkered flag to take his maiden race victory, ahead of Sebastian Vettel. Williams also managed to pick up their first points since 2019, while Verstappen, still with car damage, limped in the final points-paying position.

Hours after the race, Sebastian Vettel was disqualified from second place for failing to provide the stewards with the required 1-liter fuel sample at the end of the race.

Much of the pre-race build-up focused on the Lap 1 incident at Silverstone, where title rivals Hamilton and Verstappen made contact at the Copse corner, sending the Dutchman into the barriers at high speed. Hamilton was then given a 10-second penalty, but yet recovered to win the race, as a result narrowing the drivers' championship lead as well as narrowing Mercedes' lead in the Constructors' championship. Red Bull were the most vocal on the incident, with team principal Christian Horner criticizing Hamilton's actions and advisor Helmut Marko calling for a race ban for the seven-time champion, but Mercedes team principal Toto Wolff claimed otherwise, with several drivers stating it was merely a racing incident. A meeting was held between representatives from FIA, Red Bull and Mercedes on Thursday before the race, requested by Red Bull to review the incident in the hopes Hamilton could be handed a harsher penalty. The request however, was rejected, as the FIA deemed that the new elements provided by Red Bull were neither significant nor relevant to the matter.

With time running out for Mercedes' second seat, Wolff has also assured that he would assist Bottas whenever he can if Bottas gets dropped at the end of the season.

The full entry list for the 2021 Hungarian Grand Prix is outlined below:

Eliminated in Q1 were Tsunoda, Russell, Latifi, Mazepin and Schumacher, who was unable to set a time due to his car being repaired following his crash in FP3. For the first time in the season, Russell failed to progress into Q2.

Sainz spun and crashed his car heavily at the last corner with seven minutes of the session remaining while on a flying lap. He was eliminated out of Q2 with Ricciardo, Stroll, Raikkonen and Giovinazzi.

Both Mercedes drivers put times fast enough for them to secure a front row lockout, with Verstappen in third. On their final runs, Pérez, who was fourth fastest, missed out on starting his final flying lap. Hamilton did not improve on his final run, while Verstappen only improved slightly but unable to beat Bottas.

The full qualifying results for the 2021 Hungarian Grand Prix are outlined below:

The race started at wet conditions, with the entirety of the field starting on intermediates. At the end of the formation lap, Giovinazzi pitted for a gamble on dry tires. At the start, Hamilton and Verstappen made good getaways, but Bottas started poorly, then misjudged his braking into the first corner, ramming into Norris who in turn slammed into Verstappen. As Bottas slid into the barriers with suspension damage, he also collected Perez, the Mexican continuing on before being forced to stop halfway on the lap from a suspected broken engine. Bottas hence picked up a 5-place grid penalty for the next race for causing the mayhem. Meanwhile, Stroll collided into Leclerc, who in turn tangled Ricciardo, the former two retiring on the spot while the Aussie continued. Stroll was thus given the same punishment as Bottas for the next race. Norris and Verstappen pitted for component changes, during which Verstappen lost part of his car's bodywork on pit exit. With Turn 1 littered with debris, the safety car was called out, before the red flag was thrown out the following lap to clear the mess. McLaren determined that Norris' car was too damaged to continue and hence retired him, ending his consecutive points-finishing streak.

By the time the mess had been cleared, the weather had improved. On the formation lap restart, all drivers except Hamilton dived into the pits for dry tires, leaving Hamilton alone on the grid. Hamilton had to struggle for one lap on intermediate tires on a dry circuit before stopping, dropping down to last, which promoted Russell into the lead. Russell was ordered to concede several positions due to an infringement, hence running in 7th, promoting Ocon into the lead, Vettel into second and Latifi into 3rd, and encouraging scene for Williams. Meanwhile, Mazepin would retire after his suspension was damaged from contact with Raikkonen who was exiting from the pit lane, the Iceman would receive a 10-second time penalty for the incident. More bad luck came for Alfa Romeo, as Giovinazzi was given a stop-go penalty for speeding in the pit lane.

As Ocon tried extending his advantage from Vettel at front, Verstappen was all over the Haas of Schumacher for tenth, a small delight for the American outfit following Mazepin's retirement. It took for a couple of laps for the Dutchman to get past Schumacher, despite struggling with a damaged bargeboard and making slight contact as he completed the move. Hamilton meanwhile had also passed Giovinazzi before, and once Verstappen disposed of Schumacher, the German fell behind Giovinazzi and Hamilton as well, all gaining a place ahead as Raikkonen pitted and served his penalty at the same time.

When the round of pit stops began, Hamilton pitted on Lap 20 for hard tires, before Verstappen and Ricciardo did a lap later, but the seven-time champion's pace meant that he undercut and got ahead of both former Red Bull team-mates after their stops. With fresher tires, and with those ahead making stops, Hamilton was able to put in a string of fastest laps, ultimately running in fifth after clearing Tsunoda. Sainz also undercut Latifi and Tsunoda, putting him in third behind the leading pair of Ocon and Vettel.

Vettel pitted for mediums on Lap 36, but a slower stop for him meant that Ocon was still able to stay ahead of the four-time champion after a fast stop from him on the following lap, at the same time promoting Alonso into the lead. Alonso would stop on Lap 40, and come out behind Sainz and Hamilton. The two-time champion began reeling into Hamilton as he was unable to find a way past Sainz. Hamilton would make a second stop on Lap 48, and then charge to the rear of Alonso. For the next few laps, Alonso defended brilliantly from his former McLaren team-mate. His defense ended on the 65th lap, after locking up on Turn 1 and allowing Hamilton through, and eventually dispatching Sainz a couple of laps later. Verstappen, meanwhile, was able to clear his former Red Bull team-mate Ricciardo for 10th after staying behind him for a long time.

Despite the charging, Vettel was unable to get past Ocon, hence the Frenchman took to the checkered flag for the first time in his career, ahead of Vettel and a still-charging Hamilton. The two Spaniards Sainz and Alonso would come up to the line next, then Gasly, who took the fastest lap accolade, and completing the points were Tsunoda, Latifi, Russell and Verstappen, a huge delight for the Grove-based team for finally scoring their first points since a pointless 2020 season, with Russell defending from Verstappen until the end.

Post-race, Vettel was found to have not provided enough post-race fuel sample for the stewards, thus he was subsequently disqualified, promoting Hamilton into second place and Sainz onto the podium, while Raikkonen was promoted into the points behind Verstappen. Vettel was earlier reprimanded along with Bottas, Stroll and Sainz for a pre-race ceremony infringement.

The full results for the 2021 Hungarian Grand Prix are outlined below:

The dramatic race, finish and the post-race ruling resulted in Hamilton and Mercedes reclaiming the drivers' and constructors' championship lead respectively heading into the summer break, Hamilton leading from Verstappen by eight points, while Mercedes led ahead by 12 points. The contenders for third place remained in the drivers' standings due to their failure to score, while Sainz moved past Leclerc by three points. McLaren's failure to score allowed Ferrari to come level yet get ahead by countback in the constructors', due to having set two pole positions earlier in the season. Gasly tied with Ricciardo for points, but placed ahead by countback due to the Frenchman having finished a podium in Baku. Ocon's victory vaulted him up to 10th, 11 points behind Gasly and Ricciardo, with Alpine's big points haul allowing it to claim th in the constructors' standings ahead of AlphaTauri, while Aston Martin dropped from 6th to 7th following their disqualification and failure to score, with Stroll shuffled down to 14th, leveling with Tsunoda but the Japanese rookie ahead in the standings by countback. Williams' long-awaited (double) points finish ensured both their drivers scored ahead of the Alfa Romeo drivers as well as getting ahead of Alfa Romeo in the constructors' standings, hence leaving Haas as the only team left yet to score a point in the season.