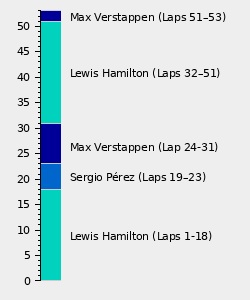 The 2021 French Grand Prix (officially the Formula 1 Emirates Grand Prix de France 2021) was the seventh race of the 2021 FIA Formula One World Championship, held at the Circuit Paul Ricard in Le Castellet, France between June 18 and June 20 2021.

Max Verstappen took pole position and won the race for Red Bull, despite running wide at the first lap allowing Lewis Hamilton into the lead, but retook the lead with two laps remaining on a two-stop strategy. Hamilton came in second while Sergio Pérez passed Valtteri Bottas for third as Mercedes had to deal with tire wear issues.

The previous running of the French Grand Prix was canceled due to the COVID-19 pandemic, but the race was reinstated into the 2021 calendar[1]. The race was then brought forward a week earlier from its scheduled date, following the cancelation of the Turkish Grand Prix that was supposed to replace the canceled Canadian Grand Prix[2].

Heading into the race weekend, Max Verstappen retained his lead ahead of rival Lewis Hamilton by 4 points, both failing to score from the previous round in Baku. Sergio Perez' win with Mercedes' failure to score extended Red Bull's lead to 26 points.

A major topic discussed were the tire failures that caused Lance Stroll and Verstappen's retirements during the Baku round. Pirelli has launched an investigation and found that they were due to a "circumferential break on the inner sidewall which can be related to the running conditions of the tire". Mercedes also made modifications to the steering following Hamilton's mistake on pressing the "magic button" during the race restart to prevent a repeat.

Ahead of the race weekend, it was announced that Romain Grosjean would be participating in a test session for Mercedes on June 29. The former Haas driver, who was unable to race for the last two races of 2020 following a horrific crash at the 2020 Bahrain Grand Prix, would also be conducting some demonstration laps with the team as well on the race weekend[3]. The rescheduling of the calendar meant that Grosjean would be unable to perform the demonstration laps as it clashes with an IndyCar weekend, but Mercedes have stated that the test would go ahead as planned on the date[4]. The test session was postponed yet again due to travel restrictions.

Ahead of the weekend it was also announced that Esteban Ocon had extended his contract with Alpine for another three years until 2024. Hamilton's teammate Valtteri Bottas has again rubbished rumors that he would be replaced mid-season. McLaren meanwhile ran tributes on their cars to honor longtime shareholder Mansour Ojjeh, who passed away the morning of the previous round.

The full entry list for the 2021 French Grand Prix is outlined below:

Tsunoda spun and crashed into the wall in Turn 1, stopping the session just minutes after it started. The session ended early with Schumacher, who had managed to qualify into Q2 for the first time in his career, spun and collided with the barriers at Turn 6. Tsunoda thus joined Latifi, Raikkonen, Mazepin and Stroll out of Q1, with Stroll failing to set a lap time due to Schumacher's crash, having his earlier run deleted for track limits violations.

Bottas ended the session fastest. Out in Q2 were Ocon, Vettel, Giovinazzi, Russell and Schumacher, who set no time due to his accident earlier.

The full qualifying results for the 2021 French Grand Prix are outlined below:

The full results for the 2021 French Grand Prix are outlined below:

Verstappen extended his lead ahead of Hamilton to 12 points, with both title rivals having tied with the same amount of wins they had so far in the season. While Red Bull extended the constructors' championship lead from Mercedes by 11 points from the double podium, both Ferraris failed to score, hence McLaren retook third in the constructors' standings, while Bottas got back ahead of Leclerc.