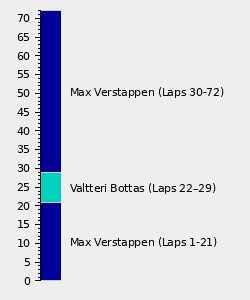 Max Verstappen took pole position and won comfortably at his home ground far ahead of the Mercedes drivers Lewis Hamilton and Valtteri Bottas, reclaiming the championship lead, with Hamilton taking fastest lap on the final lap. Sergio Pérez recovered from a pit lane start to finish in 8th.

The return of the Dutch Grand Prix was due to have taken place in the previous season, but it was postponed, then canceled following the COVID-19 pandemic, with the race being reinstated into the schedule for the 2021 season.

Much of the talk pre-race was the previous race that saw the race entirely canceled due to heavy rain and after a few laps behind the safety car. The decision was met with criticism, with drivers calling for ticket refunds to fans and also the decision to award half-points when no true racing laps have been done at all. In response, FIA president Jean Todt announced that he would be calling for a review in rules in the next month, while F1 has announced that they are looking into options with race promoters for the tickets.

The full entry list for the 2021 Dutch Grand Prix is outlined below:

Leclerc topped Q1 while eliminated out of the session were Perez, Vettel, Kubica, Schumacher and Mazepin. Vettel had been on a flying lap when he was impeded by the Haas duo. They were summoned to the stewards but no further action was taken.

Verstappen topped Q2 while with four minutes remaining, Russell spun out of Turn 13 and rear-ended into the barriers, taking no further part in the session. As the session ended, Latifi spun off and crashed at Turn 7, prematurely ending the session. Both Williams drivers were eliminated with Stroll, Norris and Tsunoda.

Verstappen took overall pole despite his DRS failing to deploy on his final flying lap, with Hamilton a close three hundredths of a second behind.

The full qualifying results for the 2021 Dutch Grand Prix are outlined below:

The full results for the 2021 Dutch Grand Prix are outlined below:

While Verstappen's win effectively meant that he reclaimed the championship lead from Hamilton, with a 3-point lead heading into Monza, Perez' low finish meant that Mercedes extended their championship advantage slightly ahead of Red Bull by 5 points. Bottas' finish combined with Perez and Norris' low finishes ensured he reclaimed third in the constructors' standings, as Perez closed the gap to Norris to 6 points. Other drivers' changes include Leclerc and Alonso getting ahead of their team-mates respectively, and also Gasly ahead of Ricciardo after the Honey Badger's non-points finish.

In the constructors' standings, Ferrari once again reclaimed third due to the lower finishes of the McLaren drivers, the only change in the standings.