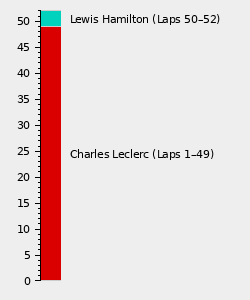 The 2021 British Grand Prix, (officially the Formula 1 Pirelli British Grand Prix 2021) was the tenth round of the 2021 FIA Formula One World Championship, held at the Silverstone Circuit in Northamptonshire, England on July 18 2021. It was the first race weekend to host the new sprint qualifying format introduced in the season.

At the start of the race, Hamilton made a better start than Verstappen, with the latter defending coming out of Turn 1, the duel continuing until the Copse corner, when Hamilton made contact with Verstappen, spearing him heavily into the barriers and causing the race to be red-flagged and stopped on the following lap, with Charles Leclerc taking an unlikely lead for Ferrari during the chaos. On the restart, Leclerc held onto the lead, while Hamilton was given a 10-second time penalty for his incident with Verstappen shortly afterwards. Hamilton pitted and served his penalty on the 27th lap, but did not lose much places and was able to make up ground thanks to slow stops for Lando Norris (who passed Bottas at the restart and dropped behind him as a result of the slow stop), Fernando Alonso and Carlos Sainz, Jr. Leclerc, who had to deal with a power unit issue earlier on during the race, conceded the lead to Hamilton after running wide at Copse with three laps remaining, the seven-time champion ultimately winning and heavily reducing the championship lead to his rival, while Bottas settled in third after being given team orders not to battle with his team-mate. Sebastian Vettel was the other retirement of the race, withdrawing from damage after spinning at Woodcote at the restart.

At the end of the 2020 season it was announced that the pit straight of the circuit would be named as the Hamilton straight, honoring Lewis Hamilton.[1]

On the Portuguese Grand Prix weekend, it was announced that all ten teams have unanimously agreed to trial a new sprint race format[2]. The Silverstone Circuit has since announced to be the first site for hosting the new format[3], with the weekend's schedule announced[4].

The format for sprint qualifying will be as follows:[5]

In addition, following two closed-door races in the previous year, the circuit announced that it would be welcoming a full-capacity crowd, which is part of the Event Research Programme (ERP).[6]

The full entry list for the 2021 British Grand Prix is outlined below:

Hamilton ended Q2 fastest courtesy of a tow from his team-mate Bottas. While Russell get into Q3 in Williams for the second consecutive time, eliminated in the session were Alonso, Gasly, Ocon, Giovinazzi and Stroll.

After setting the fastest lap early on, Hamilton was improving on his final run when he slipped at the Vale corner, but nevertheless, secured pole for the sprint qualifying as Verstappen did not improve his time in his second run.

The full qualifying results for the 2021 British Grand Prix are outlined below:

Despite his brakes catching fire, Verstappen got past Hamilton at the start, twice going wheel to wheel into Brooklands and Copse. He led for the rest of the race until the checkered flag, albeit slowing down his pace on the final lap due to his and Hamilton's tires blistering. Bottas maintained in third ahead of Leclerc despite starting on softs compared to the others on mediums, while Alonso, another one starting on softs, made the most position gains on the first lap, going from 11th to 5th, and came in 7th in the end behind the McLaren drivers. There was chaos on the first lap, as Russell tagged Sainz, causing him to drop but he recovered to 11th, while Mazepin spun after making contact with his team-mate. While trailing Alonso, Perez spun at the Becketts esses, dropping down to the back of the grid and retiring on the final lap, hence starting the main race last.

The full results for the 2021 British Grand Prix Sprint Qualifying are outlined below:

Hamilton had a better start than Verstappen as the lights went out, while Leclerc passed Bottas for third into Turn 1. Hamilton edged ahead of Verstappen at the Wellington Straight, going on the outside of Brooklands, but Verstappen reclaimed the lead at the following Luffield corner. As the duel went into Copse, Hamilton's left front made contact with Verstappen's rear right, causing Verstappen to spin, the rear right tire detaching from the rim and colliding sideways into the barrier with a force of 51 G. Leclerc took the lead as the duo collided, just before the safety car was called before the red flag was shown on the following lap. Verstappen meanwhile climbed out unhurt from his wrecked car, and was taken to the hospital for further checks. The contact meant that Hamilton had damage to his front left rim, and the red flag allowed the team to perform repairs.

The race was restarted 35 minutes after the crash. Leclerc held onto the lead at the restart, with Norris passing Bottas into Turn 1. Vettel spun into the old pit entry just before Woodcote, but got going and dropped down to the pack. Shortly afterwards, Hamilton was issued a 10-second time penalty for the collision. Leclerc then reported intermittent power issues, which the team told him how to fix it, allowing Hamilton to briefly close into Leclerc. When the round of pit stops began, a few drivers had particularly slow stops. Norris' slow stop was due to an issue with the rear right tire, as a result he dropped back behind Bottas and Alonso. This allowed Bottas to stay ahead of Norris after his stop, passing Alonso on the Wellington Straight on his outlap. After being passed by Norris at Vale on the same lap, Alonso pitted on the following lap, also suffering a slow stop. He rejoined behind Stroll and immediately disposed of him.

Hamilton pitted on Lap 28, serving his penalty and rejoining the race in 5th place, thanks to Norris and Alonso's slow stops. The combined pit stop and penalty for Hamilton mean that Leclerc now led Sainz a Ferrari 1–2. Sainz pitted a few laps later, apparently having an issue with his front left tire and leaving his pit box longer than intended. Leclerc then pitted without issues and came out still leading, while Hamilton dispatched his countryman Norris, and then passed Bottas at Stowe, who was given orders from the team not to fight his team-mate. Vettel retired from damage on the 40th lap, while on the 49th lap, Perez, who had been charging after starting from the pit lane, had an incident at Club with Raikkonen which the latter spun. Perez was called for a third stop to pit for fresh tires in an attempt to take away the fastest lap point from Hamilton, which he did, but was unable to score the extra point as he came in 16th. Gasly also made a third stop due to suffering a late puncture and dropped out of the top 10. With three laps remaining, Hamilton, who had been steadily charging, managed to overtake Leclerc at Copse, this time without incident as the first lap as the Monegasque ran wide. Hamilton cruised on to win his home race for a record eighth time, with Leclerc coming in second and Bottas in third, and the McLaren duo of Norris and Ricciardo finishing behind them. Sainz, Alonso, Stroll, Ocon and Tsunoda completed the points-scoring positions.

The full results for the 2021 British Grand Prix Main Race are outlined below:

With Verstappen and Red Bull failing to score in the race at Silverstone, despite having won the sprint qualifying, Hamilton reduced the drivers' championship lead down to eight points, while Mercedes narrowed the constructors' championship lead heavily to 4 points. Perez lost two places behind Norris and Bottas, failing to score despite setting the fastest lap but not finishing in the top 10. Leclerc's podium meant that Ferrari did little damage to the battle for third with McLaren, reducing the gap by 4 points. Tsunoda's finish in the final points-paying position helped AlphaTauri retain 5th by one point ahead of Aston Martin.