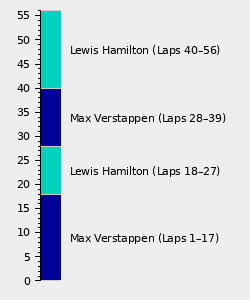 The 2021 Bahrain Grand Prix (officially the Formula 1 Gulf Air Bahrain Grand Prix 2021) was the first race of the 2021 FIA Formula One World Championship, held at the Bahrain International Circuit between March 26 and March 28 2021.

Max Verstappen took pole position for Red Bull after dominating all three free practice sessions, but Lewis Hamilton managed to perform an undercut and take the lead from Verstappen, and managed to win ahead of Verstappen by less than a second as the Dutchman reeled him in in the closing laps, at one point successfully passing him but was told to relinquish the position after running wide and exceeding track limits while overtaking him at Turn 4 of the track, albeit reporting a differential issue early in the race. Hamilton's team-mate Valtteri Bottas finished third after a long pit stop cost him to lose battle for the lead, but took the fastest lap of the race.

The race start was aborted with one extra formation lap ran due to Sergio Perez stopping from an electrical issue on the initial formation lap, but he was able to get going and finish 5th in his first race in Red Bull. Haas rookie Nikita Mazepin became the first retirement of the season as he lost control and wrecked at Turn 3 on the first lap, deploying the Safety Car, while Fernando Alonso, making his return to F1 also retired from brake issues. Sebastian Vettel had a disastrous race for his first start in Aston Martin, being penalized for a qualifying violation and handed a 10-second post-race penalty after colliding with Esteban Ocon. Pierre Gasly, who started 5th, dropped back to 17th after making contact with Daniel Ricciardo and breaking his front wing. Gasly's team-mate and rookie Yuki Tsunoda was the only rookie to score points on debut in 9th.

The off-season period since the last race in 2020, the Abu Dhabi Grand Prix, was not without news and incidents. The season-opening race for the 2021 season, the Australian Grand Prix, was due to take place on March 21. Due to the COVID-19 pandemic, which started from China in early 2020, leading to the 2020 season being postponed and heavily rescheduled, the Australian Grand Prix was announced to be postponed to November 21, with the Chinese Grand Prix also postponed to a yet-to-be announced date.[1] The postponement meant that the São Paulo, Saudi Arabian and Abu Dhabi Grands Prix were also rescheduled. The Emilia Romagna Grand Prix, originally intended as a one-off race in the 2020 season subsequently returned on the calendar.[2] Following the announcement, all teams agreed to move pre-season testing from Barcelona to Bahrain, taking place from March 12 to 14, two weeks before the season-opener.[3]

Drivers were not spared from incidents as well. While Lando Norris, Charles Leclerc and Pierre Gasly contracted COVID-19 during the off-season period[4][5][6], two-time champion Fernando Alonso, set to make his comeback in Formula 1 since 2018, was involved in a road accident in Switzerland. The Alpine Team released a statement that they expect Alonso to recover in time for pre-season testing.[7]

In a series of news conferences from new F1 CEO Stefano Domenicali, he reveals that F1 is intending to hold a summit in Bahrain before the race to discuss a variety of matters, including driver behavior[8]. Among them, was Lewis Hamilton's role in highlighting racial injustice since the killing of American citizen George Floyd in 2020, and Haas rookie Nikita Mazepin, who caused controversy when he uploaded a video of him groping a model's chest onto Instagram on December. The former Ferrari team principal had also dismissed the idea of reverse grid races, which had been in talks for a while, and that they were to trial sprint races as part of a format change[9].

An F1 Commission meeting with F1 and FIA officials and teams on February 11 yielded a number of outcomes:[10]

With the expectation of the return of spectators for the 2021 season, the Bahraini government has offered to provide COVID-19 vaccinations to F1 staff and attendees, although an F1 spokesperson confirmed that the organization has no plans to have themselves vaccinated[15]. However, Sergio Pérez, Carlos Sainz, Jr. and the entire AlphaTauri team have all accepted the offer to be vaccinated[16][17]. Spectators are also allowed if they are vaccinated or recovered[18].

The resulting pre-season testing showed some results, with Red Bull as favorites to challenge the title as Max Verstappen set the overall fastest time on the final day of testing. McLaren also looked good for title contention under the revived McLaren-Mercedes partnership, with Daniel Ricciardo setting the fastest time on the first two morning sessions. Mercedes appear to have struggled with Valtteri Bottas having gearbox issues on the first day and Lewis Hamilton spinning and momentarily stopping the session on the second day. However, testing on the final day was overshadowed by the death of legendary commentator Murray Walker at the age of 97, on the evening after the second day of testing. On the grand prix weekend, Williams ran a tribute to Walker by displaying his quote on Damon Hill's title win at the 1996 Japanese Grand Prix on their cars' halos.

The full entry list for the 2021 Bahrain Grand Prix is outlined below:

Verstappen set the fastest time in Q1, but the shock of the session came from the Alpine of Esteban Ocon and the Aston Martin of Sebastian Vettel, both failing to set improved times due to a yellow flag caused by Nikita Mazepin spinning on Turn 1. For the tenth time in his career, George Russell was able to get into Q2 for Williams.

The main shocker was Sergio Perez in his first Red Bull weekend, as his initial lap time was deleted for track limits violations. He improved further but only ended up 11th fastest, with AlphaTauri rookie Yuki Tsunoda in 13th.

The final session saw Verstappen coming out from Hamilton in the battle for pole, the first time since 2013 that a Red Bull had taken pole in the season-opener. Fernando Alonso qualified 9th on his first race back.

The full qualifying results for the 2021 Bahrain Grand Prix are outlined below:

The full results for the 2021 Bahrain Grand Prix are outlined below:

Mercedes continued their streak of leading the constructors' standings continuously since the 2018 German Grand Prix.