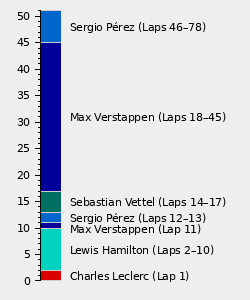 Qualifying was beset by four red flag sessions, but it was the Ferrari of Charles Leclerc who took pole, with Lewis Hamilton starting second after having his Mercedes slow on Friday practice, with title rival Max Verstappen in third.

Leclerc led at the start, with Hamilton taking the lead by slipstreaming Leclerc a few laps later. A delayed pit stop release for Hamilton relegated him to behind the Red Bulls, with Verstappen and Sergio Pérez leading. The Safety Car was deployed after Lance Stroll had a tire failure and wrecked on the main straight. Then, with five laps from the finish, Verstappen suffered the same fate as Stroll, causing the red flag. At the restart, Hamilton locked up into Turn 1, dropping down the order while Perez was left to cruise to his second career victory. Sebastian Vettel gave Aston Martin their first podium in second, with AlphaTauri's Pierre Gasly in third.

The event from the previous season was canceled due to the COVID-19 pandemic, but the current season's running had been reinstated into schedule[1], with race officials announcing that the race will take place behind closed doors[2].

Heading into the sixth round Max Verstappen led Lewis Hamilton in the standings by four points following victory at the previous round at Monaco, with Red Bull leading ahead of Mercedes by a point.

Much of the talk in the build-up to the race was flexible wings used by rivals, including Red Bull, which gave them advantage on long straights. Ahead of Monaco, the FIA issued a directive as well as outlining a series of tougher tests on rear wings. The new directive is to come into force by June 15, the period between the Azerbaijan and French Grands Prix, with both Mercedes and McLaren strongly voicing their disapproval on the timing of the enforcement. [3]

The full entry list for the 2021 Azerbaijan Grand Prix is outlined below:

Q1 was red-flagged twice, with Stroll first crashing his Aston Martin into Turn 15, before Giovinazzi fell victim on the same spot moments after the restart. They were joined by Latifi, Schumacher and Mazepin in being eliminated out of the session.

Verstappen set the fastest time in the session, with Tsunoda putting a time nearly three-hundredths shy of the former's time, ensuring that the Japanese rookie progressed to Q3 for the first time in his career. The session ended prematurely as Ricciardo crashed his car into Turn 3. He was joined by Vettel, Ocon, Raikkonen and Russell out of Q2, the latter two's improvement runs interrupted from the red flag.

Leclerc benefitted a slipstream from Hamilton to set the fastest time early on, while Hamilton got to second fastest from a tow from Bottas, who could only wind up 10th. Both Verstappen and Perez were only able to clock in third and seventh fastest respectively, with Gasly the best of the rest with 4th fastest. The session was red-flagged for the fourth time when Tsunoda first crashed into Turn 3 with Leclerc's team-mate Sainz, who was following behind, spun into the run-off and damaged his front wing. Leclerc thus secured his 9th career pole, with Hamilton starting alongside him after Mercedes' slow performance on Friday practice. The number of red flags deployed thus equaled the 2016 Hungarian Grand Prix for the most red flags deployed in a qualifying session. Norris, who qualified 6th, was given a three-place grid penalty for a red flag infringement during Q1, therefore demoted to 9th.

The full qualifying results for the 2021 Azerbaijan Grand Prix are outlined below:

Before the race start, there was a minute's silence for the deaths of former FIA president Max Mosley, who died in between race weekends, and longtime McLaren shareholder Mansour Ojjeh, who died the morning before the race.

Perez and Vettel made good starts at the start of the race, gaining positions in the chain of racing cars. Leclerc, despite starting from pole position, was overtaken by Hamilton before DRS was enabled due to avoiding a tree branch at an earlier part of the circuit. Ocon suffered a power unit failure on the fourth lap, becoming the first retirement of the race. As Hamilton pitted, his pit exit was delayed to avoid an unsafe release upon Gasly. Verstappen and Perez later stopped, the latter's having a slower stop but still got ahead of Hamilton. The Red Bulls' stops meant that Vettel was promoted into the lead in Aston Martin. Vettel would later stop, handing the lead to Verstappen. Verstappen began to pull away as Hamilton stayed close within Perez.

With most of the racers using hard tires in their second stints, Stroll suffered an instantaneous puncture on Lap 31, requiring a safety car and blocking access to the pit lane. When the hazard was cleared, Alonso (P13), Giovinazzi, Russell and Schumacher made their tire change to softer compounds, whilst the leaders stayed out.

The continued use of hard tires proved to be disastrous for Verstappen, who suffered the second instantaneous tire puncture in the similar location as Stroll with five laps remaining, crashing in the grid start area and resulting in a red flag within a few laps. During this incident, Latifi received a 10-second stop-go penalty for failing to use the pit lane during the incident.

Just before the standing restart, Russell returned to the pits to retire the vehicle. With the extinguishment of the five lights, the cars commenced again, with Hamilton experiencing a lockup and driving into the drive-off at turn 1 and dropping to last, which became second-to-last after Latifi served his penalty.

Perez got his second career race win for the race, but had a breakdown in the lap towards Parc Férme. Vettel and Gasly obtained podium positions, the latter resisting a late charge from Leclerc. Verstappen set the fastest lap of the race (1:44.481), but gained no points for not finishing in the top 10.

The full results for the 2021 Azerbaijan Grand Prix are outlined below:

With both title rivals failing to score, the top two positions remained on the top of the driver standings, Hamilton ending his 54-race streak of finishing in the points in every race entered and started. Pérez' victory saw him move up to third in the standings, with Leclerc's fourth-place finish pushing both Norris and Bottas down the order. Vettel and Gasly also moved up the order following their surprise podium finishes, pushing down Ricciardo. Raikkonen managed to regain his points following his penalty at Imola. In all, the bottom of the drivers' standings had a major shake up following the incident-filled race.

Red Bull extended their championship lead ahead of Mercedes by 25 points courtesy of the race win, while Ferrari were able to go ahead of McLaren with their combined finish. Despite Vettel's podium, Gasly and Tsunoda's finish meant that AlphaTauri had taken the 5th spot in the constructors' standings.