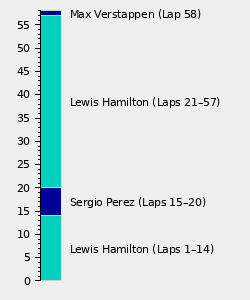 The 2021 Abu Dhabi Grand Prix (officially the Formula 1 Etihad Airways Abu Dhabi Grand Prix 2021) was the 22nd and final race of the 2021 FIA Formula One World Championship, held at the Yas Marina Circuit between December 10 and December 12 2021. This was the 2021 title decider, as both Lewis Hamilton and Max Verstappen were tied going into the race, at 369.5 points each respectively.

In June 2021, it was announced that the circuit would be undergoing layout changes in a bid to improve on-track action, having seen races with little or no action in the previous years. The following changes are to be done on the circuit:[1][2]

Right before the start of the weekend's events, it was announced that the contract to host the Abu Dhabi Grand Prix as the season finale will be extended until 2030.[3]

The full entry list for the 2021 Abu Dhabi Grand Prix is outlined below:

Max Verstappen had the early edge over Lewis Hamilton on Formula One’s most dramatic race weekend in living memory, as he topped first practice for the season-ending, title-deciding Abu Dhabi Grand Prix at the heavily revised Yas Marina Circuit.[6]

Mercedes' Lewis Hamilton set the fastest time in the second practice session of the while his championship rival Max Verstappen was fourth for Red Bull.[7] The session finished with Raikkonen crashing heavily at Turn 14.

Lewis Hamilton set the fastest time ahead of Max Verstappen in the final hour of practice in Abu Dhabi – with the all-important qualifying session to come.[8]

Hamilton set the fastest time of the session with Latifi, Russell, Raikkonen, Schumacher and Mazepin out of Q1.

After on-track traffic moments in the final seconds, Verstappen set the fastest time, but did so on soft tires as opposed to the Mercedes drivers on medium tires. Eliminated from the session were Alonso, Gasly, Stroll, Giovinazzi and Vettel.

Verstappen set the fastest time that was unbeatable until the end of the session, with Hamilton, whose initial run was compromised by a lock-up into Turn 5, could not improve enough on his last run. Crucially however, Hamilton would be starting on the more durable medium compound as opposed to his rival's softs. Norris qualified a surprise third ahead of Perez, with Bottas in sixth in his last Mercedes outing.

The full qualifying results for the 2021 Abu Dhabi Grand Prix are outlined below:

Hours before the race, it was announced that Mazepin had tested positive for COVID-19, hence not taking part in the start. There was no replacement fielded for him.[13]

The race started at 17:00 local time on Sunday, December 12. Hamilton took the lead from Verstappen at the start, Verstappen attempted to repass in turn six.[14] Hamilton left the track, cut the corner and rejoined with his lead considerably extended. This caused an immediate protest to race director Michael Masi by Red Bull, and the team was told by radio that Hamilton had given back any advantage gained.[14] The incident was referred to the stewards, which concluded that no further investigation was necessary.[14] Hamilton then gradually extended his lead until the first round of pit stops.

Verstappen made his stop at the end of lap 13 with Hamilton following suit one lap later, both opting for a set to the hardest available tyres. Red Bull decided not to stop Pérez, in the hope that he could hold up Hamilton later. Hamilton caught up with Pérez on lap 20 and attempted to pass with the advantage of his much fresher tyres. Pérez defended hard and was overtaken by but then repassed Hamilton until finally losing his position one lap later. He had, however, managed to make Hamilton lose almost his entire lead over Verstappen. The latter was not able to attack, and Hamilton's gap to Verstappen gradually extended again.

On lap 26, Räikkönen collided with the barriers at turn six and subsequently retired due to brake issues, marking the end of his 349th and final Formula One start.

On lap 35, Giovinazzi retired his car with gearbox issues alongside the track, which triggered a virtual safety car period and ended his racing carrer in Formula 1. Red Bull used this opportunity to bring Verstappen in for a fresh set of the hardest tyres without losing track position, while Hamilton stayed out. Normal racing resumed two laps later. Using the advantage of fresher tyres, Verstappen gradually reduced his deficit, but not at a rate which would have been sufficient to catch Hamilton before the end of the race.[14]

On lap 53, a crash for Nicholas Latifi brought out the safety car. Hamilton again stayed out without pitting, while Verstappen pitted behind him for a fresh set of the softest available tyres. During the safety car period Pérez retired, due to engine problems. After Verstappen's pit stop, he retained second, but with five lapped cars between himself and Hamilton (in first).

Prior to the end of the safety car, seemingly conflicting messages were given by race control regarding whether lapped cars would be able to unlap themselves from behind Hamilton before the safety car was withdrawn. Drivers were initially told this would not be done at all, but this decision was partially reversed on lap 57, with only the five lapped cars sitting in-between Verstappen and Hamilton allowed to pass the safety car; the other three lapped cars were not given directions to overtake the safety car.

The safety car pulled in at the end of the penultimate lap, allowing for one lap of green flag racing before the finish. On the final lap Verstappen used his fresh soft tyres to pass Hamilton into turn five to take the lead of the race. He held off counter-attacks from Hamilton to win the race and his first World Drivers' Championship. Mercedes gained enough points to win their eighth consecutive Constructors' title, extending their own record.[15]

Hamilton finished the race in second, and third place was awarded to Ferrari driver Carlos Sainz, who completed the podium[16] and ended 5th in the championship.

Mercedes protested the result of the race on two counts: for Verstappen overtaking Hamilton under the safety car, and that they believed race director Michael Masi did not follow the correct procedure by only allowing the lapped cars between Verstappen and Hamilton to uplap themselves, before the restart at the end of lap 57, despite initially rejecting requests from Red Bull to do so.[17]

Mercedes have lodged their intention to appeal to the FIA's International Court of Appeal citing potential breaches of Article 15 of the International Sporting Code and Article 10 of the FIA's Judicial and Disciplinary Code, with the team given 72 hours after the race has concluded to decide whether they wish to take the matter further.[20] Mercedes withdrew the appeal as the FIA announced a 'clarification exercise' on the final laps of the race.

George Russell who will drive for Mercedes in 2022 called the race finishing decision of race director Michael Masi 'unacceptable'.

Max is an absolutely fantastic driver who has had an incredible season and I have nothing but huge respect for him, but what just happened is absolutely unacceptable. I cannot believe what we’ve just seen.
—George Russell via Twitter

Lando Norris said the decision to go racing again on the last lap was made 'for TV'.[21]

The full results for the 2021 Abu Dhabi Grand Prix are outlined below: