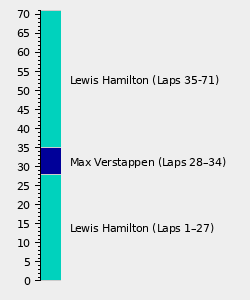 In qualifying, the circuit was hit with wet weather that already cancelled FP3. Lewis Hamilton bravely took pole position about 1.2 seconds ahead of Max Verstappen and Carlos Sainz, Jr.. Hamilton went on to win for the first time in the season, as Verstappen came in third after being passed by Valtteri Bottas near the end of the race, who started fourth. Behind Bottas, there was drama unfolding for the last two laps. Sergio Pérez broke his front wing while attempting to pass Alexander Albon for fourth, while Pérez' team-mate Lance Stroll ran deep while trying to pass Daniel Ricciardo for sixth. All the drama allowed Lando Norris to come in 5th place ahead of Pérez, with the latter, Stroll and Ricciardo crossing the line three-wide. Both Ferraris retired from the race after Charles Leclerc collided into Sebastian Vettel on the first lap, Leclerc damaging his car's floor after knocking off Vettel's rear wing. Ricciardo's team-mate Esteban Ocon was the other retirement of the race from a cooling issue.

The fall-out from the COVID-19 Pandemic had heavily affected the calendar for the 2020 season, and resulted in the extraordinary decision to run a second race at the Red Bull Ring, marking the first time that a single circuit had hosted two World Championship rounds.[2] However, to avoid confusion with the Austrian Grand Prix which would open the season, the second race at the Red Bull Ring would be named the Styrian Grand Prix after the region of Styria, Austria's second largest region and the home of the Red Bull Ring.[2] Otherwise, there would be no changes to the circuit other than a change of name to the event, with the same timetable, track layout and rules, after a bid to implement reverse-grid rules was scuppered by Mercedes.[3]

Ferrari revealed that they would bring a major upgrade to the second race of the season, an enforced change to their upgrade schedule after their miserable showing in the opening race.[4] Indeed, while Charles Leclerc had claimed a podium finish at the opening race, the two scarlet cars were a second off the pace in qualifying, while Sebastian Vettel failed to get into Q3, and spun during the race.[4] The update was expected to feature some re-profiling of the aerodynamics to reduce drag and improve stability.[4]

Ahead of the second race of the season Williams announced that their main test and reserve driver Jack Aitken would take part in FP1 for the Styrian Grand Prix, taking over the #63 car of George Russell for the session.[5] The decision had been made for a variety of reasons, although primarily because of new rules regarding the "bubble system" implemented by the series, which could rule out a driver from competing at a race if they had a positive COVID-19 test at the start of a race meeting.[6] It was therefore seen as a priority for Williams to have their lead reserve driver gain track time with the FW43, and after a full meetings running at the Red Bull Ring a week earlier, it would not cost Russell any time to setup the car.[5]

Another team to take up the option of running their reserve driver in FP1 would be Alfa Romeo-Ferrari, who would put veteran reserve racer Robert Kubica in Antonio Giovinazzi's car.[7]

Elsewhere, there were widespread reports that Fernando Alonso would return to the F1 paddock in 2021, with Renault having approached the former Champion about their available race seat.[8] The Spaniard, who had left the Championship at the end of 2018 to pursue the Triple Crown of Motorsport, had been associated with McLaren since his exit, and had hinted at wanting to return to the Championship after winning the World Endurance Championship in 2018/19.[8] A formal announcement about his signing was expected during the Styrian Grand Prix weekend.[8]

Valtteri Bottas led the Championship after claiming victory at the opening round, with his pole to victory run earning him 25 points. Charles Leclerc was a surprise second in-spite of a poor showing in qualifying, while Lando Norris was in third having claimed the bonus point for fastest lap. Lewis Hamilton and Carlos Sainz, Jr. then completed the top five, with Sergio Pérez, Pierre Gasly, Esteban Ocon, Antonio Giovinazzi and Sebastian Vettel also on the scoresheet.

In the Constructors' Championship it was Mercedes who led the way after the opening day, having scored 37 points courtesy of Bottas and Hamilton. McLaren-Renault were next up in second, sat on 26, while Ferrari were in third on eighteen. Racing Point-BWT Mercedes, AlphaTauri-Honda, Renault and Alfa Romeo-Ferrari then completed the scorers.

The full entry list for the 2020 Styrian Grand Prix is outlined below:

The full qualifying results for the 2020 Styrian Grand Prix are outlined below:

The full results for the 2020 Styrian Grand Prix are outlined below: