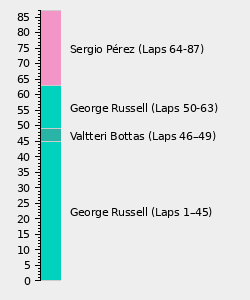 The 2020 Sakhir Grand Prix (officially the Formula 1 Rolex Sakhir Grand Prix 2020) was the sixteenth race of the 2020 FIA Formula One World Championship, staged at the Bahrain International Circuit in Sakhir, Bahrain, on 6 December 2020. The event saw the circuit being raced using a different layout.

George Russell, who was replacing Lewis Hamilton in Mercedes due to the seven-time champion recovering from COVID-19 was fastest in Friday's practice sessions but it was Valtteri Bottas who took pole position, with Russell a narrow 0.026 seconds behind, and Max Verstappen starting third. Russell got past Bottas at the start, but the Safety Car was deployed immediately after Charles Leclerc, starting in fourth, tipped Racing Point's Sergio Pérez into a spin, damaging his suspension and resulting Verstappen to retire as well as he ended in the wall while avoiding the collision. Leclerc was handed a three-place grid penalty in the next race as a result.

As the race resumed Russell and Bottas pulled away, with now third-placed Carlos Sainz, Jr. leading a train of cars behind him. Perez, suffering no damage, pitted at the end of the first lap and eventually recovered into the points a few laps later. There would be no drama until with around 20 laps remaining, debutant Jack Aitken, replacing Russell in Williams spun at the final turn and broke his front wing, bringing out the second safety car. During this period, Mercedes had fitted wrong tires onto their drivers, causing Russell to stop in another lap to change into the correct set of tires, which promoted Perez, Esteban Ocon and Lance Stroll into the top 3, the Mercedes drivers running 4th and 5th. As the race restarted, Russell managed to charge to second, but was forced to pit again after a slow puncture developed.

That left Perez to claim his maiden victory at the line, becoming the second Mexican driver to win an F1 race and the first since Pedro Rodríguez in the 1970 Belgian Grand Prix. Ocon finished 10 seconds behind, taking his first career podium with Stroll in third, a reverse of fortunes for Racing Point after failing to score in the previous round. Russell meanwhile was able to recover to 9th and set the fastest lap, earning his first points.

Post-race, Mercedes were fined €20,000 for the tire mix-up, but Russell was allowed to keep his finishing position and his maiden points.

The third venue to host back-to-back race weekends after Red Bull Ring and Silverstone in 2020, the second race on the Bahrain International Circuit, named as the Sakhir Grand Prix, will see the outer layout of the circuit being used[1]. Prior to the season-opening race, on June 12, F1 managing director Ross Brawn had suggested that were Bahrain would host back-to-back race weekends, a second layout would be used, including the possibility of using the outer "oval" layout of the circuit, skipping the infield section[2]. The confirmation of the second layout being used on August 28 will mean that the Bahrain International Circuit would have used three different layouts overall in F1 (the previous, unpopular endurance layout was used in the 2010 race).

Romain Grosjean suffered a massive accident on the previous race, his Haas breaking into two and bursting into flames after wrecking into the barriers on the first lap, but was able to walk away and suffered only burns to his hands, the incident triggering discussions on the latest safety procedures implemented by the FIA. The day after the race, it was announced that reserve driver Pietro Fittipaldi, who is the grandson of double world champion Emerson will be replacing him for the weekend[3], making it the fourth time a driver with the Fittipaldi name to race in F1.

Following his win at the previous round, Lewis Hamilton was announced to be tested COVID-19 positive two days after the race, the Mercedes team saying in a statement[4]:

Lewis was tested three times last week and returned a negative result each time, the last of which was on Sunday afternoon at the Bahrain International Circuit as part of the standard race weekend testing programme.

However, he woke up on Monday morning with mild symptoms and was informed at the same time that a contact prior to arrival in Bahrain had subsequently tested positive. Lewis therefore took a further test and returned a positive result. This has since been confirmed by a retest.

Lewis is now isolating in accordance with COVID-19 protocols and public health authority guidelines in Bahrain. Apart from mild symptoms, he is otherwise fit and well, and the entire team sends him its very best wishes for a swift recovery.

Following the announcement, Mercedes have announced that Williams driver George Russell will be replacing Hamilton for the weekend[5], with F2 Campos driver and Williams reserve driver Jack Aitken taking over Russell's seat, effectively making his race debut with Fittipaldi[6]. At around the same time, Haas have also announced that Formula 2 HiTech GP driver Nikita Mazepin[7] and F2 chapmionship leader and Prema driver Mick Schumacher[8] will be their new drivers making their debut for the team in the 2021 Formula One Season.

The full entry list for the 2020 Sakhir Grand Prix is outlined below:

The full qualifying results for the 2020 Sakhir Grand Prix are outlined below:

The full results for the 2020 Sakhir Grand Prix are outlined below: