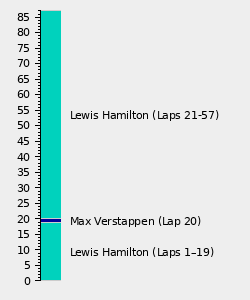 The 2020 Bahrain Grand Prix (officially the Gulf Air Bahrain Grand Prix 2020) was the fifteenth race of the 2020 FIA Formula One World Championship, staged at the Bahrain International Circuit in Sakhir, Bahrain, on 29 November 2020.

Having won the drivers' championship title at Turkey, Lewis Hamilton took pole position with Valtteri Bottas second alongside him. The race was immediately red-flagged at the start after the Haas of Romain Grosjean crashed heavily into the barriers after Turn 3. The Frenchman was sent spearing into the barriers after tangling with AlphaTauri's Daniil Kvyat, the impact breaking the car into two and bursting into flames, but Grosjean climbed out and walked away largely unhurt despite minor burns.

As Grosjean was airlifted to hospital in Manama, the race restarted after nearly an hour and a half, and the safety car was deployed after Kvyat flipped Lance Stroll, resulting in a 10-second penalty. Bottas, who initially dropped back before the red flag, suffered a puncture on the restart and recovered up to 8th. Hamilton, Max Verstappen and Sergio Pérez looked set to finish on the podium until with three laps remaining, Perez' engine went up in flames, hence failing to finish. The Safety Car was deployed as a result, with the race finishing behind it and Hamilton won ahead of Verstappen, with Alexander Albon inheriting the final podium place, making it the first time since the 2017 Japanese Grand Prix both Red Bull drivers finished on the podium.

Originally scheduled on March 22 as the second round, the Bahrain Grand Prix, alongside the Vietnam Grand Prix were postponed on March 13 [1], the same day the Australian Grand Prix was called off after one of McLaren's team members tested positive for COVID-19.

On August 25, the FIA announced the remaining races of the revised 2020 calendar, with the Bahrain Grand Prix being rescheduled on November 29. As with Red Bull Ring and Silverstone, the Bahrain International Circuit will serve as the same venue for back-to-back race weekends, with the second race using a different layout of the circuit and being named as the Sakhir Grand Prix.

Prior to the postponement, on March 8, Bahrain Grand Prix organizers announced in a statement that the race will initially be run as a closed-door event, meaning spectators will be barred from entering [3].

The full entry list for the 2020 Bahrain Grand Prix is outlined below:

The full qualifying results for the 2020 Bahrain Grand Prix are outlined below:

The full results for the 2020 Bahrain Grand Prix are outlined below: