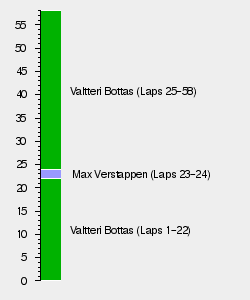 Lewis Hamilton started the season as the defending World Champion, while his team Mercedes were the defending Constructors Champions.[3] However, the build-up to the race was marred by the sudden death of Race Director Charlie Whiting on the eve of practice.[4]

At the start, Valtteri Bottas managed to jump ahead of Hamilton. Despite pitting early to cover off Sebastian Vettel, Hamilton was unable to match Bottas' pace. Bottas won by around 20 seconds, ahead of Hamilton, for a Mercedes one-two. Max Verstappen, who had started behind Vettel, managed to overtake the German for the final podium position.

The 70th edition of the FIA Formula One World Championship would kick-off at what had become the traditional starting venue for the season, the Melbourne Grand Prix Circuit in Melbourne, Australia.[1] The ever popular circuit around Albert Park Lake remained unchanged ahead of the visit in 2019, with sponsorship from Rolex funding the race.[1] With no major circuit changes the interest instead laid in the entry list and changes to the teams over the winter, with a vast array of changes both to the rules and the driver line-up.

The biggest feature of the 2019 F1 regulations would be the front wings, with increased restrictions on how many winglets.[5] The new design limited the number of elements on the wing to a maximum of seven, while also limiting the teams to two deflectors to push air over the car.[5] It was hoped that the new design would allow cars to follow one-another better, at the expense of slower lap times.[5][6]

Elsewhere there were also modifications to the rear wing, which was to be increased in size by 100mm, with the DRS slot also expanded by 20mm.[5] These changes would effectively ensure that a car would punch a bigger hole through the air, increasing the effects of slipstreaming, while the 25% increase in DRS would also enhance the influence of the overtaking aid.[5] There were also reductions to the size of barge boards and brake ducts, reducing their aerodynamic effectiveness, as well as a marginal increase in minimum weight to 740 kg including the driver.[5]

Into the entry list and there were some sweeping changes across the field, with no fewer than twelve changes to driver line-ups over the winter.[8] Indeed, defending World Champions Mercedes were one of only two teams not to change either of their drivers, with Valtteri Bottas partnering defending Drivers Champion Lewis Hamilton for a third consecutive season.[9][10] Their new car, the W10 EQ Power+ performed reasonably in winter testing at Barcelona, with the German squad focusing on long-distance running rather than outright pace, although Hamilton would set the second fastest time of the test on the final day.[11]

In contrast, Mercedes premium customers Williams arrived with a whole new line-up for 2019, partnering Mercedes Junior Driver, and reigning FIA Formula 2 Championship Champion George Russell alongside veteran Polish ace Robert Kubica.[12][13] Yet, in spite of employing two drivers on talent as much as budget, it proved to be a turbulent winter for the former Champions, with the FW42 missing more than half of the first test.[14] Furthermore, when Russell and Kubica did finally get out on track the FW42 seemed to be well of the pace of the midfield, with the Brit and the Pole ending the test slowest of all.[11]

The third and final Mercedes powered team were Racing Point, who arrived in their first full season in F1 having taken over the Force India entry midway through 2018.[15] Rather predictably, team boss Lawrence Stroll employed his son Lance to drive for the team, partnering the Canadian with veteran Mexican racer Sergio Pérez for the campaign, leaving Mercedes junior Esteban Ocon without a seat.[16][17] In terms of pace the new Racing Point RP19 was not among the fastest in the field during testing, although the team were plotting a major update ahead of the season opening race.[11]

Other than the factory Mercedes squad, only Haas would enter the 2019 season with an unchanged driver line-up, retaining their long-standing pairing of Kevin Magnussen and Romain Grosjean.[18] They would also retain their close links to Ferrari, with the Haas VF-19 using a Ferrari sourced engine, gearbox and rear-end as the team had done since their debut in 2016.[18] Indeed, the only change for the 2019 season would be a change in sponsors, with drinks company Rich Energy taking over as title sponsor for the full campaign.[19]

Elsewhere, the factory Ferrari team would start the season as the favourites, with their duo of Sebastian Vettel and Charles Leclerc having been consistently fastest throughout pre-season testing.[11] Vettel had been retained by the Scuderia, who would be officially entered as Scuderia Ferrari Mission Winnow courtesy of a title sponsorship deal with the Philip Morris Group, to lead the team, alongside Ferrari Driver Academy graduate Leclerc.[20][21] Leclerc had earned his promotion from Sauber at the end of the 2018 campaign, and duly matched Vettel's pace throughout the Barcelona tests with the new Ferrari SF90.[22]

Leclerc's former employers Sauber, meanwhile, would not officially appear on the entry list for the 2019 season, for technical partners Alfa Romeo took over the naming rights for both the team and chassis.[23] Yet, Sauber would still run the team, signing ex-Ferrari ace Kimi Räikkönen to lead the team, alongside the Ferrari backed Italian Antonio Giovinazzi.[24][25] The new car, the Alfa Romeo C38, would run reliably at the pre-season tests, with the team, using a large number of Ferrari parts akin to Haas, ending the test in the mid-field.[11]

The factory Renault squad would start the 2019 season as arguably the fourth fastest team in the field after the Barcelona tests, having largely focused on race pace until the final day.[11] Indeed, the French squad would start the season with a re-vamped driver line-up, having poached the highly rated Daniel Ricciardo to partner Nico Hülkenberg for the season.[26][26] The pair seemed fairly evenly matched in the new RS19 during the tests, with the car running reliably barring a DRS failure for Ricciardo during the first week of testing.[11]

Elsewhere, Renault's only customers for the 2019 campaign would be McLaren, who would take former factory driver Carlos Sainz, Jr. to lead their team following the departure of Fernando Alonso at the end of 2018.[27] The Spaniard would lead the line for McLaren alongside their latest Young Driver Programme graduate Lando Norris, the Brit having finished as runner-up in the 2018 F2 Championship.[28] In terms of pace the new MCL34 appeared to be in the midfield, much like its predecessor, although the McLaren squad were confident that they could evolve the car consistently through the season.[11]

Completing the entry list would be the two Honda engined teams, led by the Red Bull team after their switch to the Japanese manufacturer at the end of 2018.[29] Their effort would be led by Max Verstappen, officially confirmed as the team's number one driver, while Pierre Gasly was promoted to the senior team after his debut with Toro Rosso in 2018.[30][31] In terms of pace the new Red Bull RB15 proved both reliable and reasonably quick, with the majority of the F1 paddock placing the squad in third overall after the pre-season tests.[11]

The final team on the entry list were Toro Rosso, who would have a complete change to their driver line-up for 2019.[32] Prepared for another season as Honda's test bed for Red Bull's engines, the Toro Rosso squad had adopted the Haas approach to building an F1 car, with the Toro Rosso STR14 using the maximum number of components allowed from the senior Red Bull squad.[32] In terms of drivers, meanwhile, the team would field ex-racer Daniil Kvyat, returning to the team that had sacked him in 2017, and former Red Bull Junior driver Alexander Albon after a strong F2 campaign in 2018.[33][34]

The full entry list for the 2019 Australian Grand Prix is outlined below: