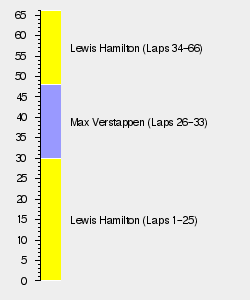 The LX Gran Premio de España Emirates 2018, otherwise known as the 2018 Spanish Grand Prix, was the fifth round of the 2018 FIA Formula One World Championship, staged at the Circuit de Barcelona-Catalunya on 13 May 2018.[1] The race was the first of the season to be staged in Europe and, as ever, featured a wide array of upgrades for the field.[2]

In qualifying, Lewis Hamilton took his second pole position of the season, whilst his teammate Valtteri Bottas qualified alongside him on the front row to score Mercedes' first front row lockout of 2018, and Sebastian Vettel qualified third on the grid.

In the race, Hamilton stayed in the lead while Vettel overtook Bottas, before the safety car was called out after Romain Grosjean spun into the paths of Nico Hülkenberg and Pierre Gasly. After the safety car came in at the end of lap 6, the order of the top three did not change aside from the pit stops. When the virtual safety car was later deployed on lap 40 due to Esteban Ocon suffering a mechanical failure on his car and parking it beside the track, Vettel came into the pits for a new set of tyres, but dropped behind Bottas and Max Verstappen. Hamilton continued on to take his second victory of the season, while Bottas scored Mercedes' first one-two finish of the season, enabling them to take the lead of the Constructors' Championship. Verstappen completed the podium despite running with a slightly damaged front wing after trying to lap Lance Stroll at the end of the virtual safety car.

Formula One headed to its familiar winter home for the fifth round of the 2018 Championship tour, with the highly technical Circuit de Barcelona-Catalunya playing host to the 60th Spanish Grand Prix.[1] Likewise the circuit would play host to the FIA Formula 2 Championship, as well as the opening round of the GP3 Series.[1] Otherwise, the circuit and entry list remained unchanged since the teams' visits for the Barcelona Tests, although the new tarmac had been worn in by other series.[1]

However, while the circuit remained unchanged, the tyres Pirelli had brought along to Catalunya were slightly different to those used previously.[3] Indeed, while the compounds were faithful to the familiar choice of "medium", "soft" and "supersoft", Pirelli had been allowed to reduce the overall tread depth of every tyre by 4mm after overheating issues during the pre-season tests.[3][4] It was thought that the reduction in rubber would allow heat to escape from the tyres quicker than it otherwise would have, an issue that had affected all of the teams during the pre-season tests.[3]

Elsewhere, several teams and drivers were dealing with the fallout from the rather bruising 2018 Azerbaijan Grand Prix, with Red Bull in particular having to deal with their own PR disaster.[5] Their issues came as a result of the collision between Max Verstappen and Daniel Ricciardo towards the end of the Azerbaijan Grand Prix which had seen both retire, after the pair had touched on more than one occasion during the race itself.[5] While both were apologetic about the incident, and accepted they both were at fault to some degree, Red Bull team principle Christian Horner revealed that the team would review their rules of engagement again ahead of the Spanish Grand Prix, having already done so on the morning of the Baku brawl.[5]

Horner's comments followed those of Mercedes Chairman Niki Lauda, who declared that it was Verstappen's weaving ahead of the braking zone that led to the accident, making it '70% Verstappen and 30% Ricciardo'. [6] The three time World Champion also suggested that, had the accident happened at the Silver Arrows, that both drivers would be fined, although Horner dismissed this idea instantly.[5] Regardless, the future of the Ricciardo-Verstappen partnership remained in doubt, particularly as it was only two years since Daniil Kvyat had been dropped from the senior squad after a series of incidents in 2016.

As if to distract the media pack surrounding their driver clashes, the Red Bull team also revealed that they had had a formal meeting with Honda in Azerbaijan regarding engines for 2019.[7] The Austrian squad had already signed their junior team Toro Rosso team to the Japanese manufacturer for the 2018 season, and, as expected, were prepared to fully investigate a switch to Honda before the deadline to declare an engine supplier in mid-May.[7] Red Bull's current suppliers Renault were open-minded about the talks, having fallen out with the Austrian backed effort in 2014.[7]

Away from Red Bull and Haas found their drivers under fire for their actions in the grid, with Pierre Gasly labelling Kevin Magnussen as 'the most dangerous driver on the grid'.[8] Magnussen had, according to replays, Gasly, and the stewards, pushed the Frenchman into the wall during the second restart, resulting in the Dane receiving a ten-second penalty at the end of the race.[8] Their clash, which saw pieces of Gasly's front wing dumped onto the start/finish straight, would ultimately cause Valtteri Bottas' retirement a lap later, although Charlie Whiting revealed that there had been no reports of debris on the circuit after the restart.[9]

Haas' other driver Romain Grosjean, meanwhile, was receiving flak for his ignominious exit from the race under the second safety car, with the Frenchman sliding into the barriers while warming his tyres.[10] The Frenchman had initially blamed one of the Saubers for the accident, only for replays to show that he had spun into the barriers all on his own.[10] After the race, Grosjean conceded that he was to blame, having accidentally caught a switch that changed his brake balance, catching him out as the rear axle locked.[10]

Elsewhere, Sergey Sirotkin, having caused a collision with Sergio Pérez on the first lap in Azerbaijan, received a three-place grid penalty for Barcelona, although the Russian's employers Williams ultimately made an appeal.[11] Their case revolved around the concept of comparing Sirotkin's clash to every other incident in Azerbaijan that either resulted in time penalties or no further action, although as they lacked any substantial evidence of their own, the appeal was rejected.[12] In an unrelated affair, Williams would also part ways with their lead designer Ed Wood, who had been with the team for twelve years.[13] Wood, who had overseen the team's recent switch to a more cornering focused design, was said to have left for 'personal reasons'.[13]

In terms of the Championship, Lewis Hamilton's surprise victory in Baku meant it was the Brit who left the Azerbaijan capital at the head of the Championship, having overhauled Sebastian Vettel by four points. Kimi Räikkönen, meanwhile, had moved back into third ahead of Bottas, while Ricciardo had dropped back to fifth. Fernando Alonso had retained sixth ahead of Nico Hülkenberg, while Pérez, Charles Leclerc, Lance Stroll and Brendon Hartley had all added their names to the board.

Into the Constructors' Championship and Ferrari had smuggled the lead away from Mercedes in Baku, although their advantage over the German squad was just four points. Red Bull-TAG Heuer looked to be slipping away in third, while McLaren-Renault had remained in fourth, just a point ahead of the Renault factory squad. Force India-Mercedes had shot up the table to sixth, while Williams-Mercedes remained at the foot of the table in spite their first points finish of the season.

The dominant victory for Lewis Hamilton would see the Brit establish a seventeen-point lead atop the World Championship standings, with Sebastian Vettel remaining in second. Behind the two Finns Valtteri Bottas and Kimi Räikkönen swapped places, while Daniel Ricciardo completed the top five. Elsewhere, Max Verstappen climbed into sixth, while Kevin Magnussen moved into the top ten after finishing the day as best of the rest.

In the Constructors' Championship it was now advantage Mercedes, with their one-two finish moving the German squad back ahead of Ferrari. Their tally of 153 was some 27 clear of the Italian firm's although with their cars evenly matched that advantage was not a significant one. Behind them and in a solid third, were Red Bull-TAG Heuer, while Renault moved past McLaren-Renault for fourth.