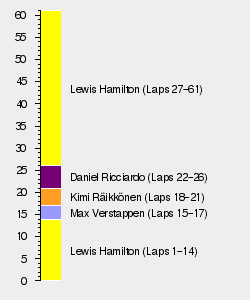 In the race, Hamilton kept the lead at the start while Verstappen held off Vettel at the first corner. At the same turn, Sergio Pérez made contact with Esteban Ocon, sending Ocon into the wall, and deploying the safety car just after Vettel overtook Verstappen on Raffles Boulevard. Sergey Sirotkin was also forced to take a late pit stop under the safety car after getting a piece of debris caught on his front wing. After the safety car came in at the end of lap 4, Hamilton, Vettel and Verstappen kept their positions. After Vettel took his pit stop at the end of lap 14, he got caught up behind Pérez, allowing Verstappen to take back second place after pitting at the end of lap 17. Hamilton went on to take his sixty-ninth overall victory and extend his championship lead to forty points over Vettel, while Verstappen and Vettel completed the podium by finishing second and third, respectively.