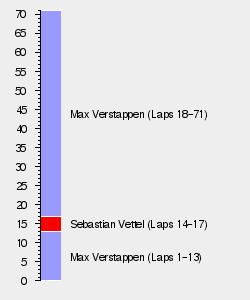 In qualifying, Daniel Ricciardo took his third overall pole position, also his first on a track other than the Circuit de Monaco. After setting the pace at the start of Q3, Max Verstappen failed to beat Ricciardo in the final stages as a result of brake issues. Championship leader Lewis Hamilton qualified third ahead of Sebastian Vettel, with both starting in positions that would make Hamilton the World Champion if they remained in those places.

In the race, Verstappen shot past Ricciardo at the start, and held off Hamilton at the first turn, followed by Ricciardo, Vettel, Valtteri Bottas and Kimi Räikkönen. The story of the race became almost every team struggling with the too-soft Pirelli tires, with most drivers making at least two stops. Verstappen was never headed, winning a solid victory. Teammate Ricciardo suffered a mechanical failure late in the race while running second, so the other podiums spots were grabbed by Vettel and Räikkönen. Hamilton drove a careful race to finish fourth, and clinch his fifth world title, while Bottas was a lap down in fifth. Every other car was at least two laps down.

Following his third-place finish in the US, Hamilton would win the title if he finished seventh or higher no matter where Vettel finishes, while Vettel would have to win the race with Hamilton finishing eighth or lower to make the championship battle carry on the next race in Brazil.[2]