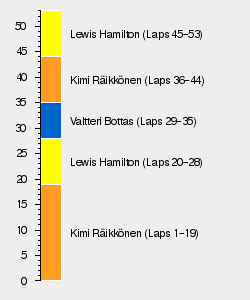 The 2018 Italian Grand Prix (officially the Formula 1 Gran Premio Heineken d'Italia 2018)[1] was the fourteenth race of the 2018 Formula One season, and the eighty-eighth time the Italian Grand Prix was held. It was held between 31 August and 2 September 2018.

In qualifying, Kimi Räikkönen took his eighteenth pole position, also his first pole since the 2017 Monaco Grand Prix, and Ferrari's first pole at the Autodromo Nazionale Monza since 2010. His time of 1:19.119 was also the fastest lap recorded at the circuit, and made him the oldest driver to take pole since Nigel Mansell at the 1994 Australian Grand Prix. Sebastian Vettel qualified second, securing Ferrari's first front-row lockout at the circuit since the 2000 Italian Grand Prix, while his championship rival Lewis Hamilton qualified just behind in third.

In the race, Räikkönen stayed ahead of Vettel and Hamilton, while Brendon Hartley was squeezed between Stoffel Vandoorne and Marcus Ericsson, damaging his front wing and front-right tyre. Hamilton made a lunge past Vettel at Turn 4, but just after Hamilton got ahead, Vettel made contact with Hamilton and was spun around, sending Vettel to the back of the field before the safety car was deployed to clear Hartley's car. After the safety car came in at the end of lap 3, Hamilton went past Räikkönen for first place on the start/finish straight, but Räikkönen took back the lead at Turn 4 on the same lap. Räikkönen pitted at the end of lap 20, but Hamilton stayed out until the end of lap 28, when Räikkönen was catching up to Valtteri Bottas, who kept Räikkönen behind him until he pitted on lap 36. With fresher tyres than Räikkönen, Hamilton snatched the lead on the start/finish straight on lap 45, and went on to take his sixty-eighth victory. Without a win since the 2013 Australian Grand Prix, and unable to challenge Hamilton with older tyres, Räikkönen settled for second. Bottas came home in third place after Verstappen was demoted from third to fifth with a five-second penalty received for making contact with Bottas in the braking zone at Turn 1 on lap 43, also putting Vettel up to fourth place.

After he caused a first-lap crash involving Fernando Alonso and Charles Leclerc at the Belgian Grand Prix, Nico Hülkenberg received a ten-place grid penalty for the Italian Grand Prix.[2] He later used another set of power unit elements, all exceeding the limit of power unit elements allowed without a penalty, thus giving him grid penalties that put him at the back of the grid.[3] Daniel Ricciardo was also demoted to the back after using Renault's "Spec C" power unit,[4] being used by Red Bull before the Singapore Grand Prix, although Renault and McLaren planned not to use it before then.[5] Alonso also used a new chassis after his car was damaged during the crash at the start of the Belgian Grand Prix, although it is described to be one "used in winter testing or the first races", without latest specification spare parts.[6]

After Sebastian Vettel beat Lewis Hamilton to victory in Belgium, Mercedes' chief Toto Wolff remarked that Ferrari became faster than Mercedes, saying: "We have seen that in qualifying. That power advantage is at various parts of the straights. You can see even at the exits, [they] are not worse than ours. The engine keeps pulling. Having said that, there's nothing that could be a trick, it might also be related to how you run the engine, how you calibrate it. We can see they have a slight power advantage and then you add that to our weaknesses out of Turn 1 especially and that causes the double whammy. If you're not very good at traction and you're being outperformed slightly on power, that lap one happens."[7]