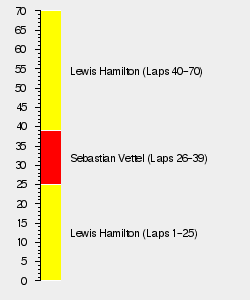 In qualifying, Lewis Hamilton took his seventy-seventh pole position, going fastest last-minute when much of the qualifying sessions were hit with heavy rain, preventing any of the Ferrari drivers from getting on the front row unlike the previous year's Hungarian Grand Prix. Valtteri Bottas qualified alongside Hamilton on the front row, while Kimi Räikkönen qualified just behind them and ahead of his teammate Sebastian Vettel.

In the race, Hamilton and Bottas kept their positions at the start, while Vettel moved past Räikkönen at Turn 3. Following the round of pit stops, Hamilton stayed in the lead while Bottas was determined to hold his position from Vettel and Räikkönen due to having older tyres. On lap 65, Vettel overtook Bottas for second place, though Bottas lost a piece of his front wing when he simultaneously made contact with the back of Vettel, thus allowing Räikkönen to get past Bottas and take third place. With a damaged front wing, Bottas dropped back, allowing Daniel Ricciardo to close in. Although the two of them made contact on lap 68, which caused damage to the side of Ricciardo's car, Ricciardo made a successful move on Bottas on the final lap to take fourth place, while Hamilton took his seventy-seventh victory, putting him twenty-four points ahead of Vettel in the Drivers' Championship. Despite the contact with Bottas, Vettel was able to pull away from Räikkönen to finish in second, while Räikkönen had to settle for third.