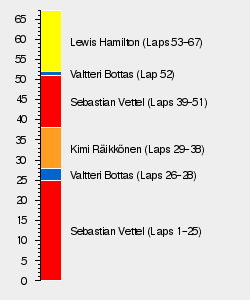 The 2018 German Grand Prix (officially the Formula 1 Emirates Großer Preis von Deutschland 2018)[1] was the eleventh race of the 2018 Formula One season. Having been absent in 2017, it was the sixty-third time the German Grand Prix will be held on the Formula One calendar, and the thirty-sixth time it will be held at the Hockenheimring. It was held between 20 July and 22 July 2018.

In qualifying, Sebastian Vettel took his fifty-fifth pole position, while his championship rival Lewis Hamilton only qualified fifteenth on the grid after he suffered a hydraulic issue at the end of Q1 and could not compete in Q2, although he moved up to fourteenth on the grid after Daniel Ricciardo was demoted to the back of the grid for exceeding the use of engine parts. Valtteri Bottas qualified second after his fastest time was beaten by Vettel last-minute, and Kimi Räikkönen settled for third on the grid.

Hamilton won the Grand Prix from 14th on the grid, leading a Mercedes 1–2 ahead of Bottas after Vettel, who has been leading for most of the race, crashed out in light rain conditions. The race was not without controversy as Hamilton was seen to abort a pit stop late in the race, cutting across the infield to rejoin the circuit which was against the international sporting code. He was reprimanded for the rules violation but was allowed to keep his race win. As a result of the race, Mercedes and Hamilton advanced to first place from second in the Constructors' and the Drivers' championship standings respectively.

A third DRS zone will be added, located along the start/finish straight.[2]

The race started under clear weather conditions. Vettel held his lead from the top five while Hamilton was in a recovery charge. By the 25th lap Vettel had built a 5-second lead ahead of Bottas when he pitted from the lead to switch from ultrasofts to softs. His teammate Raikkonen however, pitted first on Lap 14, and thus was leading when Vettel came out of his stop. As Vettel was stuck behind his teammate with his tires haven't been warmed up, Ferrari's engineering director Jock Clear issued a team order to Raikkonen, instructing him to let Vettel by.

Hamilton had recovered to seventh by Lap 8, but Ricciardo, who also started back of the grid with Hamilton, didn't fare well as his engine failed on the 27th lap, forcing him into his retirement.

As the race progressed, the weather became overcast. Hamilton pitted on Lap 43 into ultrasofts, and drizzle fell shortly after his stop, prompting a number of drivers to pit for intermediate tires. An unusual stop came from Gasly, as he went into full wet tires and ran wide into the gravel trap. Leclerc had a 360 spin at Turn 1 but managed to get going.

On Lap 51, Raikkonen lost a position to Bottas having been impeded by a lapping Magnussen. As Perez spun and recovered, Vettel, who had been leading, got caught up by the mild wet conditions and ended up in the barrier at the Sachskurve, ultimately retiring. Having been denied another potential victory at Hockenheim, Vettel pounded on the steering wheel and blamed himself.

Vettel's retirement caused the safety car to be deployed, triggering a flurry of pit stops. Hamilton controversially aborted a planned pit stop due to confusion inquiring whether Raikkonen had pitted or not. He cut across the infield from the pit entry to rejoin the circuit. As a result, Hamilton now led the race. As the safety car went in and the race restarted on Lap 57, Bottas went all-out against Hamilton, going wheel-to-wheel with him at Turn 6, but a team order was issued, instructing Bottas to hold position. The order remained until the end of the race. Hamilton won from Bottas after starting from 14th with Raikkonen completing the podium. Verstappen, who was one of the drivers gambling on intermediates, finished in 4th. Renault's Hulkenberg finished as the best of the rest in 5th. Completing the points finishing positions were Grosjean, Perez, Ocon, Ericsson and Hartley, who benefitted from a 10-second time penalty to Sainz for passing during the safety car period. Both Williams drivers Stroll and Sirotkin and Alonso joined Vettel and Ricciardo as the race's retirements.

* - Carlos Sainz received a 10-second penalty for passing during a safety car period.