Formula 1 Wiki
Register
Don't have an account?
Sign In
Advertisement
in: 2018 Grands Prix, British Grand Prix, Formula One races in the United Kingdom 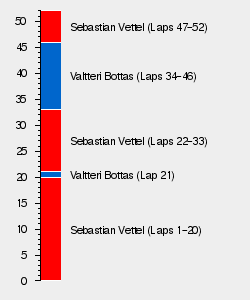 In the race, Hamilton made a poor start and fell behind Vettel and Valtteri Bottas, before Kimi Räikkönen collided with him at Turn 3 and left him at the back of the field. As Vettel controlled the race in first place, Hamilton fought his way back past the backmarkers and the midfield, and moved up into fifth place following Daniel Ricciardo's second pit stop. When the safety car came out after Marcus Ericsson spun off into the barrier at the Abbey corner at the end of lap 32, Vettel, Max Verstappen and Räikkönen all pitted while Bottas and Hamilton both stayed out, putting Bottas in the lead and Hamilton in third. One lap after the safety car came in at the end of lap 37, Romain Grosjean and Carlos Sainz, Jr. collided at Copse, and the safety car came back out for another four laps. With the race restarted at the end of lap 41, Bottas and Vettel fought for the lead, with Vettel finally passing Bottas on lap 47 with fresher tyres, and Hamilton passed Bottas a lap later. However, Hamilton's tyres were not fresh enough to let him fight for the lead, as Vettel took victory for the second time at the Silverstone Circuit, ending Hamilton's winning streak of four consecutive British Grand Prix wins, while Räikkönen finished third after passing Verstappen during the second restart and later passing Bottas.

A third DRS zone was added, going along the pit straight and the Abbey and Farm corners, marking the first time that DRS was used on corners, as drivers can go fast on low fuel at those corners, although it would lack aerodynamic grip, which would make it harder to handle corners at fast speeds. However, the drivers would be able to manually deactivate DRS if they feel they would not be able to take the corners while using it.[2]