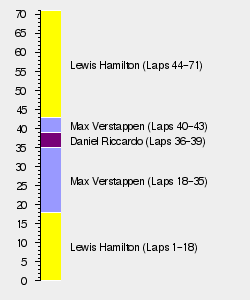 In qualifying, Lewis Hamilton took his eighty-second pole position and Mercedes' one-hundredth pole, despite an incident with impeding Sergey Sirotkin during Q2 while they were on their out-laps. Sebastian Vettel joined him on the front row, and Valtteri Bottas qualified third on the grid.

In the race, Hamilton led early, but was overtaken by Max Verstappen. Verstappen looked to have the race in hand, before he collided with Esteban Ocon while trying to put Ocon a lap down. Verstappen recovered to run in second, but could never quite catch Hamilton, who won the race to secure Mercedes' fifth Constructors' title. Kimi Räikkönen drove a solid race to take third.