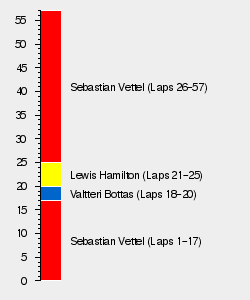 In qualifying, Sebastian Vettel went fastest last-minute to secure his fifty-first pole position ahead of his teammate Kimi Räikkönen, who scored his first front row start at the circuit. Valtteri Bottas qualified in third, whilst his teammate Lewis Hamilton was demoted from fourth to ninth on the grid with a five-place grid penalty as the result of changing his gearbox without reaching the minimum of using the same gearbox in six consecutive races.

In the race, Bottas overtook Räikkönen at the start whilst Vettel soared into the lead. Following the pit stops, Vettel kept his lead and was able to hold off Bottas in the final stages despite running on older, softer tyres, taking victory and his second consecutive win of the season. Hamilton, meanwhile, made his way through the midfield after he slightly fell behind at the start, while the retirements of Räikkönen, Daniel Ricciardo and Max Verstappen promoted him to third, completing the podium.

The Bahrain Grand Prix would play host to the second round of the 2018 F1 season, swapping places with the Chinese Grand Prix on the final version of the 2018 calendar.[2] Otherwise, the event would take place as it had since 2011, with the Bahrain International Circuit remaining unchanged ahead of its fourteenth Grand Prix.[2] Indeed, the race weekend would include a familiar support programme, including the opening round of the 2018 FIA Formula 2 Championship, as well as the final meeting of the Porsche GT3 Cup Middle East.[3]

In terms of the entry list, there would be no changes after the Australian Grand Prix, meaning attention was instead focused on the tyre choices made by each driver.[4] Even in this there would be little variation, with Lewis Hamilton, Sebastian Vettel, Kimi Räikkönen, Daniel Ricciardo and Max Verstappen all choosing the same number of tyres.[4] Indeed, the only change among the top three teams would be Valtteri Bottas, who opted to select one fewer "Medium" Pirelli compound to claim an additional "soft" in the #77 Mercedes.[4] Elsewhere, McLaren duo would go softest, both Fernando Alonso and Stoffel Vandoorne choosing nine "super-soft" tyres, while Marcus Ericsson had the hardest selection with three "medium" tyre sets.[4]

On the topic of tyres, there was conformation from Haas that their double retirement in Melbourne had been caused by two cross threaded wheel nuts, meaning both cars were released with only three properly fitted wheels.[5] As such, to compound their misery, the Haas team were slapped with a €10,000 fine, €5,000 apiece for Romain Grosjean and Kevin Magnussen, for releasing their cars in an unsafe condition.[5] The FIA did note that the team had immediately instructed their drivers to stop in a safe place after realising their mistake, although Haas did decide to re-organise their crew and introduce a "fail-safe" ahead of the Bahrain race.[6]

Furthermore, Haas, and major supplier Ferrari would receive further questioning regarding their relationship, with both McLaren and Force India asking the FIA to investigate.[7] Under the FIA's rules, Haas, as were any other team, were able to source up to 50% of their components from another Formula One team.[8] In this instance, Haas take the Ferrari engine, gearbox and rear-suspension design from Maranello, before commissioning Dallara to design the rest of their car.[8] However, after Haas' impressive testing and race performance at the season opener, both McLaren and Force India demanded that the relationship be investigated, particularly as the Haas VF-18 looked remarkably similar to the 2017 Ferrari SF70H.[7]

Elsewhere, there were some major changes at Sauber, who hired ex-Ferrari designer Jan Monchaux to be their head of aerodynamics.[9] Monchaux, whose career also included work with Toyota and Audi (in the World Endurance Championship), last worked in F1 with the Scuderia in 2013, but joined Sauber at the behest of partners Alfa Romeo.[9] The move came in the midst of a fallout between teams over the hiring of ex-FIA officials, although there were no outward expressions of discontent at Sauber's hiring.[9]

On the engine front there would be some changes made at Honda, which decided to bring some updated MGU-H and Turbocharger components for Toro Rosso.[10] Both Brendon Hartley and Pierre Gasly would receive the update, the latter having suffered an MGU-H failure in Melbourne, which Honda hoped would ease concerns regarding their parts around the engine punishing Bahrain circuit.[10] Elsewhere, Renault were calling for a freeze on engine development for the 2019 and 2020 seasons, citing that the engine rules were set to change for 2021 so there was little point in developing the current generation beyond 2018.[11]

Unsurprisingly, given that he had won the season opening race in Australia, it was Vettel who led the World Championship hunt heading into Bahrain, seven clear of arch-rival Hamilton. Räikkönen completed the top three ahead of Ricciardo, with Alonso completing the top five. Verstappen, Nico Hülkenberg, Bottas, Vandoorne and Carlos Sainz, Jr. completed the top ten.

With Vettel and Räikkönen scoring a double podium in Melbourne it was Ferrari who led the charge in the Constructors' Championship, eighteen ahead of Mercedes. Red Bull-TAG Heuer were next as the best Renault powered team, with the French firm themselves also sitting behind their other customer team McLaren-Renault. Force India headed the rest of the field as the best non-scorers after the race in Albert Park.

Victory for the second race in succession ensured that Sebastian Vettel left the second round of the season with 50 points to his name, leaving defending Champion Lewis Hamilton trailing by seventeen points. The Brit was a secure second, eleven ahead of teammate Valtteri Bottas, while Fernando Alonso snuck up into fourth ahead of Kimi Räikkönen. Elsewhere, Pierre Gasly was level with senior team racer Daniel Ricciardo after his maiden score, while Marcus Ericsson, Kevin Magnussen and Esteban Ocon also added their names to the score board.

Into the Constructors' Championship and Ferrari left Bahrain with their lead intact, albeit down to ten points over arch-rivals Mercedes. The German squad themselves could already look ahead of them rather than behind, for McLaren-Renault were already 33 points behind in third. Behind them came Red Bull-TAG Heuer after their disastrous evening, with factory Renault just three ahead of the Honda engined Toro Rosso team.