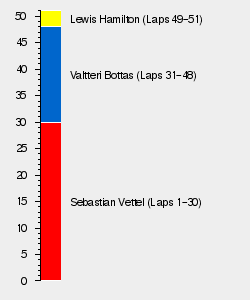 In qualifying, Sebastian Vettel took his third pole position of the season, after his teammate Kimi Räikkönen made a mistake near the end of his final flying lap while trying to go higher than sixth. Therefore, Lewis Hamilton qualified second, whilst Valtteri Bottas was third.

In the race, Vettel stayed in the lead ahead of Hamilton, but a couple of first-lap incidents resulting in the retirements of Sergey Sirotkin and Esteban Ocon put the race under the safety car until the end of lap 5. In the middle stages, Hamilton and Vettel both pitted whilst Bottas stayed out. On lap 40, Daniel Ricciardo rammed into the back of his teammate Max Verstappen, putting both Red Bull drivers out of the race and deploying the safety car for a second time. Following an accident from Romain Grosjean three laps later, the safety car stayed out until the end of lap 47, when Vettel made a move on Bottas, but locked up at the first corner and fell behind Hamilton and Räikkönen. A lap later, Vettel was passed by Sergio Pérez, whilst Bottas hit a piece of debris and immediately suffered a puncture that forced him to retire from the race. Therefore, Hamilton took the lead and his first win of the season, while Räikkönen came home in second, and Pérez completed the podium to score Force India's first podium since the 2016 European Grand Prix.

The F1 circus would head to Azerbaijan for the fourth round of the 2018 season, returning to the picturesque, if unpopular, Baku City Circuit.[2] The circuit remained unchanged from its debut back in 2016, retaining the same mix of sharp 90° corners, long apex twists and the excessively long back straight.[1] What had changed was the date of the race, with the Azerbaijan Grand Prix taking over the position of the Russian Grand Prix as the final race before the European tour.[2]

Elsewhere, there would be conformation of some of the technical specification for the 2019 season, with the FIA deciding to increase the maximum fuel allowance to 110 kg, up from 105 kg.[3] The provision was made to reduce the perceived amount of "lift and coast" going on during races, although its impact would be questionable given that the engine limit was set to remain at three for the entire season.[3] Other changes, which were agreed at a meeting between the FIA, the Formula 1 Commission, and the Formula 1 Strategy Group, included the separation of drive weight from the minimum car weight, and the need for drivers to use biometric gloves to aid any potential medical assistance.[3]

Pirelli, meanwhile, would publish the available compounds for the Azerbaijan Grand Prix, picking the second softest range of tyres they could supply.[4] In terms of compounds chosen there would be little variation between the teams, although Sebastian Vettel and Charles Leclerc would share the title of having the "softest" selection, having chosen ten "ultra-softs", and just one "soft".[4] The "hardest" choice had been made by Renault, who had decided to pick a whole two sets of "softs" for Nico Hülkenberg and Carlos Sainz, Jr., and just seven sets of "ultras".[4]

The Italian tyre manufacturers would also be revealed as the title sponsors for the returning French Grand Prix in June, amid a wave on sponsorship announcements by Formula One.[5] The other major sponsorship deal came in the renewal of Singapore Airlines' contract to sponsor the Singapore Grand Prix.[5]

Into the Championship and the dramatic conclusion to the Chinese Grand Prix proved to have an equally drastic influence to the Championship, with race winner Daniel Ricciardo shooting up into the top four. The Australian racer was still seventeen points of Championship leader Vettel, although the German had been reeled in by the pack behind ahead of the visit to Baku. Lewis Hamilton remained his closest challenger, nine points back, while Valtteri Bottas completed the top three a further five back.

In the Constructors Championship Mercedes had moved a point ahead of rivals Ferrari in Shanghai, despite the perceived superiority of the scarlet cars that weekend. Behind, Red Bull-TAG Heuer moved back into third ahead of McLaren-Renault, who were being reeled in by the factory Renault squad, while Scuderia Toro Rosso-Honda had remained in sixth. Haas-Ferrari were next ahead of Sauber-Ferrari and Force India-Mercedes, while Williams-Mercedes remained the only team yet to score.

Lewis Hamilton's surprise victory in Baku meant it was the Brit who left the Azerbaijan capital at the head of the Championship, overhauling Sebastian Vettel by four points. Kimi Räikkönen, meanwhile, had moved back into third ahead of Valtteri Bottas, while Daniel Ricciardo dropped back to fifth. Fernando Alonso retained sixth ahead of Nico Hülkenberg, while Sergio Pérez, Charles Leclerc, Lance Stroll and Brendon Hartley all added their names to the board.

Into the Constructors' Championship and Ferrari had smuggled the lead away from Mercedes, although their advantage over the German squad was just four points. Red Bull-TAG Heuer were slipping away in third, while McLaren-Renault remained in fourth, just a point ahead of engine suppliers Renault. Force India-Mercedes had shot up the table to sixth, while Williams-Mercedes remained at the foot of the table despite their first points finish of the season.