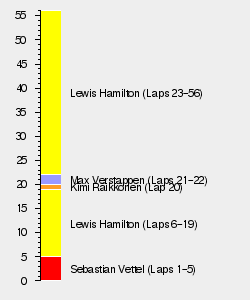 In qualifying, Lewis Hamilton took his 72nd pole position, his second at the Circuit of the Americas. Sebastian Vettel joined him on the front row, while Valtteri Bottas qualified third on the grid.

In the race, Vettel made a better start and took the lead, but Hamilton fought back and retook first place on lap 6, eventually going on to take his 62nd victory, and award Mercedes their fourth constructors' title, while Vettel finished in second place. Kimi Räikkönen completed the podium after Max Verstappen was given a five-second time penalty for passing Räikkönen off the track on the final lap.

After the previous race in Japan, Lewis Hamilton led the Drivers' Championship with 306 points, having won the Grand Prix. Due to Sebastian Vettel retiring from the race with a faulty spark plug, the gap between him and Hamilton was extended to fifty-nine points, and Valtteri Bottas's fourth-place finish put him thirteen points behind Vettel. Daniel Ricciardo's third-place finish put him on 192 points, still fourth in the drivers' standings, as Kimi Räikkönen earned ten points to own 148 points altogether in the championship.[2] With both of Mercedes' cars finishing first and fourth, the team led the Constructors' Championship with 540 points, 145 points ahead of Ferrari. Red Bull's double-podium finish put them on 303 points, ninety-two points behind Ferrari. Force India remained fourth with 147 points, while Williams remained fifth after scoring just one point to make a total of 66 points.[2]

The weekend of the Japanese Grand Prix also saw several announcements of mid-season changes starting at the United States Grand Prix. Renault allowed Carlos Sainz, Jr. to compete for them earlier than their previous contract for Sainz to compete for them in 2018, thus replacing Jolyon Palmer.[3] Sainz's departure from Toro Rosso brought Daniil Kvyat back into racing for the team.[4] Six days later, Toro Rosso confirmed that Kvyat's teammate for the United States Grand Prix]] would be Brendon Hartley, due to Pierre Gasly having to race in the final round of the 2017 Super Formula Championship occurring on the same weekend.[5]

Rather than choosing medium tyres, Pirelli decided that ultrasoft, supersoft and soft tyres would be used. Championship leader Hamilton chose seven sets of ultrasofts, three sets of supersofts, and three sets of softs to use for the weekend, while Vettel picked seven ultrasofts, four supersofts, and two softs.[6] As part of the Formula One Group's plans to raise breast cancer awareness at the race, Pirelli opted to have their ultrasoft tyres coloured pink rather than purple.[7]

After weeks of speculation following their deal to use Renault in 2018, McLaren finally confirmed that Fernando Alonso would drive for them for another year.[8]

On 20 October, Red Bull announced that Max Verstappen's contract had been extended until the end of 2020.[9]