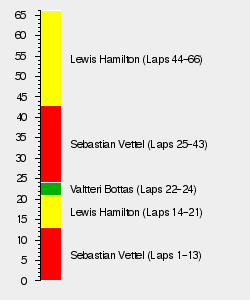 In qualifying, Lewis Hamilton took his third pole position of the season, while Sebastian Vettel joined him on the front row, once again preventing Valtteri Bottas from making a Mercedes front row lockout.

In the race, Vettel made a better start than Hamilton and took the lead before the first corner. Max Verstappen attempted to pass both Bottas and Kimi Räikkönen on the outside of the first turn, squeezing Bottas over the curb. Bottas then made contact with Räikkönen, who in turn collided with Verstappen, putting both Räikkönen and Verstappen out of the race. Following a virtual safety car period, Hamilton closed in on Vettel and regained the lead on lap 44, going on to take his second win of 2017. Vettel finished in second, and Daniel Ricciardo completed the podium after Bottas retired on lap 39 with an engine issue.