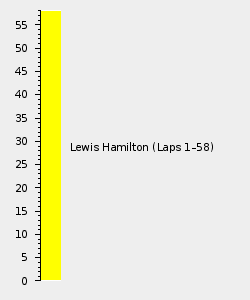 In qualifying, Sebastian Vettel took his third pole position of the season, while Max Verstappen, who was fastest in the first two sessions, went second fastest in the final session to score his second front row start. Verstappen's teammate Daniel Ricciardo qualified fourth, while championship leader Lewis Hamilton could only manage fifth on the grid.

In the race, on a wet track Vettel moved left after the start, attempting to protect his position. In so doing, he squeezed Verstappen into Kimi Räikkönen, and the three collided and were out of the race. Fernando Alonso also suffered damage that would lead to his retirement, a few laps later. Hamilton inherited the lead, and led every lap for the victory. Ricciardo was second, ahead of Hamilton's Mercedes teammate Valtteri Bottas in third.

Whilst it had yet to be officially confirmed, the press were already making the rounds that McLaren and Honda were set to end their partnership. Honda instead after much deliberations were set to bring their engines to Toro Rosso. Nonetheless, all the concerned parties remained tight-lipped about the futures of their organisation.

Fernando Alonso simply stated to Ted Kravitz " I don't know, I've read the same news you have." Asked about the future for himself and his team in the press conference, Alonso simply stated "there are options everywhere, and they are all very good. You just need to be patient and wait a couple of weeks."

However it appeared clear that Alonso was waiting for the team to make a decision over their own future before he decided his own. Alonso noted "his main priority is McLaren" and "after they make decisions, I will need to study what kind of performance they will have next year and after that I will make my decision." However he further added to Ted Kravitz, "I will make my decision to win next year and to be able to enjoy the podiums next year." Albeit as he mentioned in the press conference, there was still suggestions that he would be entering IndyCar or Le Mans 24 Hours to pursue his dream of the triple crown.

Toro Rosso appeared to be set to lose their lead driver Carlos Sainz, Jr. to the Renault team. Concerned for Toro Rosso,Ted Kravitz noted to Sainz "they're gonna get a pretty bad deal. They're gonna have a worse engine and they are going to lose their best driver, which is you. I'm worried about the future of this team, it looks like they are going to go backwards next year. Am I wrong to be worried about it?"

Sainz responded by stating "I'm not worried. I'm convinced with the group of people in this team, whatever happens they will end up sorting something out. I've been at this team for three years now, they've always come up with a decent car to be in the points in very tricky conditions." Will Buxton, however noted that Red Bull would simply be "loaning him out."

The drivers also appeared to be curt about whether Toro Rosso were to receive Honda engines for 2018. Daniil Kvyat simply said,"I don't know anything about it to be honest." . Ted Kravitz made the assertion that more news on the matter would be revealed on the Friday of the weekend and that Kvyat simply "couldn't talk about it".

Sainz, meanwhile stated "if there are rumours, it could be true, no?".

Interestingly there were rumours that Red Bull and Renault were finally set for a break in their partnership. Will Buxton noted "Red Bull have denigrated their partners ever since the Hybrid-era began." Red Bull and Renault were no longer set to remain partners after the expiration of their existing contract that ran until the end of 2018. With Mercedes and Ferrari unable to supply the team, Red Bull were looking increasingly likely to being forced to run Honda engines for the 2019 season.

Ted Kravitz further implied that it was all "long term planning" and suggested the idea that Porsche were set to enter Formula One as a "partner with Red Bull". Ricciardo responded by stating, "I think Porsche would be good for the sport. As a brand its huge and you know everyone seems to be dipping into Formula E or wanting to." However in regards to the potential of being powered by Honda in 2019, he noted "its still pretty early to start thinking about it but for sure I'll keep an eye on it and could dictate where I could go."

Max Verstappen was more curt on the issue stating "I don't know what's going to happen in the future because that's not up to me, I'm not the boss." However despite his tumultuous season with Red Bull, he maintained a positive outlook with Red Bull for the future stating "I believe in the team. That's outside the engine."

With Sainz set to join Renault, Jolyon Palmer was looking increasingly like he wouldn't have a drive for 2018. "the reliability has been a problem this year, but I would stay with Renault. I like the team and I've been here two years now." Despite rumours that Sainz was set to replace Palmer before the end of the season, Palmer assured the press that he had a solid contract for the remainder of the season. He remained positive stating "we're getting more and more competitive every weekend. Apart from Monza, of course, which was a difficult track for us, but Spa was good. My performance compared to Nico has been strong as well, so I have seven races. Strong tracks for us, strong tracks for me. Show what I can do and end the year on a high anyway."

His teammate, Hülkenberg had some sympathy for his teammate stating "He's still here fighting. He's had a lot of bad luck and some technical issues, but you know, lets see what happens."

Heading into the weekend, there was one definitive discussion point for the future as Valtteri Bottas was finally confirmed to be extending his contract with Mercedes. Bottas stated he could now "focus for long term development together as well. So I'm happy with the situation." However, once again, Bottas had confirmed only for a single year deal. Ted Kravitz, curious about this asked "Another one year deal. Do you like a one year deal?".  A surprised Bottas replied "it seems like I've always had a one year deal. Maybe it keeps me on my toes?".

Hamilton was curt in his response to Ted Kravitz about Bottas being confirmed for the future. He simply replied "it doesn't really make any difference really." Upon further questioning from Kravitz, Hamilton begrudginly stated "its nice for the team. We can just focus on doing our job."

However with Mercedes's line-up confirmed, discussion had already moved on to who would be driving for the team in 2019. Craig Slater suggested Esteban Ocon was being groomed for the seat to which he responded "I don't know. Its not me deciding that, its the bosses."

Given their successful history at the track, Ferrari were expected to be the favourites heading into the weekend. However there was also talk that Red Bull would be able to amount a serious threat to both Ferrari and Mercedes. Max Verstappen noted "you know when you look at Monaco, we were not too far off and our car was not as good by far as we have now. So I think we can be quite competitive."

On the developments of his car, he noted "I think they can build a really good car, but of course, was a bit tricky in the beginning of the year. We were just clearly off but I think in the last few races already, we've been really close and its not always easy to make a compromise downforce levels wise." ' When asked by Craig Slater as to whether the year would have been a failure if he didn't win, Verstappen simply responded by saying "I don't have to do anything." Daniel Ricciardo meanwhile noted, "we've been close the last two years. Last year we were within a second, then I think the year before with Seb, we were within a couple of seconds."

Nonetheless, Ferrari were the clear favourites and with Sebastian Vettel already taking four victories at the circuit, the expectation was to see a Ferrari victory. Ted Kravitz posed the question at the Ferrari press conference whether "it would be a let down if you didn't win this weekend." Vettel was calm in his response stating "I think it depends on the race. If you have the chance to win and you don't win, then yes. If you don't have the chance to win and you don't win, well you know... pfff." Concering whether Ferrari were the favourites, Kimi Räikkönen noted, "I don't know. Not in our minds."

However, Hamilton was also a multiple winner at the circuit having taken two victories at the circuit. Nonetheless, he was unsure of the overall pace of the Mercedes stating "we've prepared the best we could. I don't know, we'll find out I guess tomorrow." He was quick to alleviate the concerns of the circuit, stating "positioning is everything here. Its very hard to overtake. It comes down to strategy." Despite his previous two victories, Hamilton noted "I've not always gone well here. Its not a particularly strong track for me, but its been okay. However having studied and understood past years, it is a track where time on the circuit really, really counts. Obviously last year, I think I missed P2."

Accounting for a seemingly distant Hamilton, Ricciardo noted "I think Mercedes won't be as dominant here as they were last year. I think the way their car is, it doesn't seem as suited to the tighter stuff as it did last year. "

In regards to the characteristics of the circuit, Vettel stated "I go with what we have. What I will feel with tomorrow on the track. The car that I will have under me, obviously its important that you trust the car. It makes a big difference on street circuits. But yeah, there is no reason to believe that the car shouldn't be any good. But how good it will be, we'll find out."

Talking to French television, Fernando Alonso stated in regards to his coming weekend, "I'm here in body, but not in mind."

Retrieved from "https://f1.fandom.com/wiki/2017_Singapore_Grand_Prix?oldid=88867"
Community content is available under CC-BY-SA unless otherwise noted.