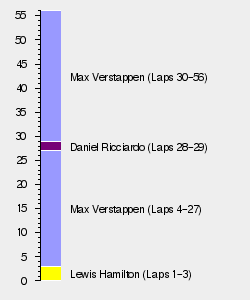 Lewis Hamilton qualified his Mercedes on pole, 0.045 seconds ahead of Ferrari's Kimi Räikkönen. Hamilton's chief rival for the championship, Sebastian Vettel, suffered mechanical problems in qualifying, and started the race in 20th and last place.

Räikkönen failed to start the race due to a turbo issue, while Hamilton kept the lead of the race until lap 4, when Max Verstappen overtook him at the first corner and pulled out a gap in front before taking his second victory, just one day after his twentieth birthday. Hamilton finished in second place, while Daniel Ricciardo finished third after managing to defend against Vettel long enough in the closing stages. Vettel came home in fourth, although he later collided with Lance Stroll on the cool-down lap.

In the Singapore Grand Prix, Sebastian Vettel caused a crash with Kimi Räikkönen and Max Verstappen, and all three retired from the race while Lewis Hamilton won it. As a result, Hamilton extended his championship lead over Vettel to twenty-eight points in the Drivers' Championship, having 263 points in the standings. Because he failed to score any points, Vettel remained on 235 points, but remained second ahead of Valtteri Bottas, who had 212 points following his third-place finish in Singapore. Daniel Ricciardo scored another eighteen points after finishing second, being fifty points behind Bottas, while Räikkönen remained fifth with 138 points.[2] With Ferrari failing to score any points in the Singapore Grand Prix, Mercedes extended their lead in the Constructors' Championship to 475 points, 102 points ahead of Ferrari. Red Bull went to 230 points with Ricciardo's podium finish, though they remained third, while Force India and Williams remained fourth and fifth respectively. Force India had 124 points while Williams had fifty-nine.[2]

On 26 September, following twelve races where Daniil Kvyat failed to score points, Toro Rosso announced that his car would be driven by Red Bull's test driver Pierre Gasly for the remaining races of the season, although they did not confirm who would compete at the United States Grand Prix due to Gasly competing in a Japanese Super Formula Championship race occurring on the same weekend.[5]

While on a warmup lap, Räikkönen reported that his car felt like there was no power. The Ferrari mechanics tried to remedy the problem, but after working on the car on the grid, they had to wheel it away before the start. Eventually, it was retired with a broken turbocharger.

Hamilton made a good start, with Bottas managing to get between Verstappen and Ricciardo. But Verstappen never let Hamilton get far ahead, and he ducked inside Hamilton at the first turn on lap 4, then proceeded to pull away. Vettel made a very strong start, and was quickly into 13th place. Ricciardo ducked inside of Bottas on lap 9. The cars traded positions and ran side-by-side, but Ricciardo finally pulled away in third.