Formula 1 Wiki
Register
Don't have an account?
Sign In
Advertisement
in: 2017 Grands Prix, British Grand Prix, Formula One races in the United Kingdom 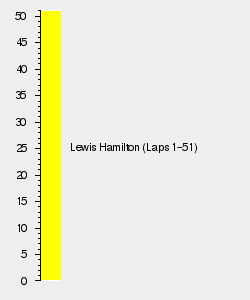 In qualifying, Lewis Hamilton took his fifth British Grand Prix pole, equaling Jim Clark's number of five poles at the British Grand Prix. Kimi Räikkönen joined him on the front row, outqualifying his teammate Sebastian Vettel for the third time of the season.

The race featured Hamilton racking up his fifth career Grand Chelem in a Mercedes. Teammate Valtteri Bottas drove an inspired race to come back from his grid penalty to take second, ahead of Ferrari driver Kimi Räikkönen. Championship leader Vettel had tyre issues late in the race, dropping him to seventh and reducing his points lead over Hamilton to just one.

In attempts to make the open cockpits more safe for 2018, a "shield" cockpit protection was tested by the Ferrari during the first practice session.[2] Sebastian Vettel ran one lap with it installed, and immediately returned to the pits, saying it made him feel "dizzy".

On 13 July, Toro Rosso were summoned by the stewards after they found out that Carlos Sainz, Jr.'s car was considered to be in an unsafe condition.[3]

During the weekend, one of the pit garages were used to present life-size models of Lightning McQueen and Jackson Storm from the Disney/Pixar film Cars 3, as part of a promotion by Disney and the Formula One Group to promote the movie's UK release.[4] Hollywood actors (and race fans) Owen Wilson and Woody Harrelson were also on hand for the promotion events.

Following the session, Bottas' gearbox was changed. Like with Hamilton's unscheduled gearbox change in Austria, Bottas did not meet the six consecutive Grands Prix before the allowance of a new gearbox, therefore receiving a five-place grid penalty.[5] On Saturday, Daniel Ricciardo was confirmed to take an unscheduled gearbox change as well, also meaning a five-place grid penalty.[6] Fernando Alonso was also confirmed to start from the back with multiple grid penalties for having additional power unit components fitted to his car.[7]