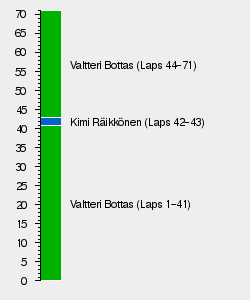 In qualifying, Valtteri Bottas took his second pole position, while championship leader Sebastian Vettel joined him on the front row. Lewis Hamilton qualified third, though he would be dropped down to eighth on the grid with a five-place grid penalty from an unscheduled gearbox change. This put Vettel's teammate Kimi Räikkönen third on the grid.

The race was won by Bottas in a Mercedes, who just held off Vettel's fast-closing Ferrari at the end. Likewise, Daniel Ricciardo in a Red Bull held off a late charge by Bottas's teammate Hamilton for third.

Since the previous Grand Prix, the motorcycle body FIM had made some minor revisions to their description of the track, and the FIA adopted those changes as official. The kink in the straight after Turn 1 was labeled as Turn 2, with the total amount of corners increased by one. And the track had been remeasured as 4.318km, down from the old 4.326km figure used.

Shortly after the session, Hamilton's gearbox was changed, resulting in a five-place grid penalty, as he failed to complete six consecutive races with his previous gearbox while he finished the previous race in Baku.[2]