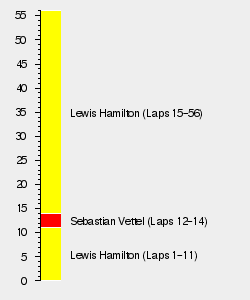 Compared to qualifying of the last two United States Grands Prix in 2014 and 2015, Lewis Hamilton this time received pole position with Nico Rosberg joining him on the front row. The lap time was also faster than Sebastian Vettel in the inaugural race in 2012. Hamilton led pretty much all of the race, and took his fourth win at the Circuit of the Americas ahead of Rosberg and Daniel Ricciardo.

At the previous Grand Prix in Japan, Nico Rosberg took his first win at the Suzuka Circuit, giving him another twenty-five points, while Max Verstappen's defensive driving against Lewis Hamilton forced the latter to settle for third place in the race, extending the gap between Rosberg and Hamilton in the Drivers' Championship to thirty-three points, enough for Rosberg to keep his lead after the United States Grand Prix. Although he only finished sixth in Japan, Daniel Ricciardo remained third in the standings, being 101 points behind Rosberg. Kimi Räikkönen kept fourth after finishing fifth, being an additional 42 points behind. Finishing second in Japan allowed Verstappen to move up to fifth, ahead of Sebastian Vettel. Although they were both on 165 points, Verstappen had won one race while Vettel won none, allowing Verstappen to move up.[2] Their 1-3 finish in the Japanese Grand Prix granted Mercedes their third constructors title, having 593 points while Red Bull were on 385. Ferrari were only fifty points behind Red Bull, while Force India remained in fourth with 134 points, ten points ahead of Williams.[3]