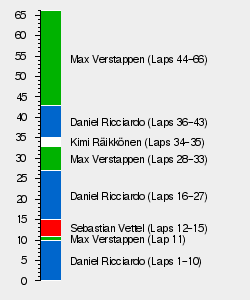 Lewis Hamilton took his second pole position at the Circuit de Catalunya ahead of his teammate Nico Rosberg, but at the start of the race, both of them crashed on the approach to Turn 4, leaving the rest of the race without a Mercedes car driving. At his first race for Red Bull, Max Verstappen took his first ever win, setting numerous records such as becoming the youngest driver and the first Dutchman to win a Grand Prix.[2] The two Ferraris joined him on the podium, with Kimi Räikkönen second and Sebastian Vettel third.