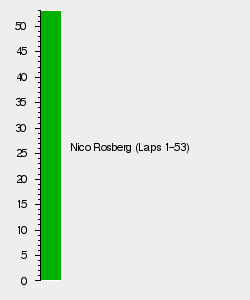 Supersoft, soft and medium tyres were used in the Grand Prix.[2]

After the Chinese Grand Prix, Nico Rosberg led the Drivers' Championship with 75 points, 36 points ahead of his teammate Lewis Hamilton. Daniel Ricciardo was third, just three points behind Hamilton.[3] Mercedes went into the Russian Grand Prix leading the Constructors' Championship with 114 points. Ferrari followed with 61 points, while Red Bull were third with 57 points.[4]

Sergey Sirotkin took part in the first practice session, being the second time he has taken part in free practice.[5]

John Booth, who was formerly the team principal of Manor, was confirmed to be Toro Rosso's director of racing,[6] while Felipe Nasr used a new chassis for his Sauber car.[7] Red Bull also tested their Aero Screen on one of their cars in the first practice session, as part of plans by the FIA to use cockpit protection starting from 2017.[8]

At the start in turn 2, eight drivers made contact with one another. Daniil Kvyat hit Sebastian Vettel in the rear, damaging Kvyat's front wing and causing Vettel to hit Daniel Riccardo and puncture his left rear tyre. Ricciardo then damaged his own front wing on Sergio Perez, who also picked up a puncture from Riccardo's hit. this caused considerable mayhem as Lewis Hamilton, Daniel Riccardo, Fernando Alonso, Romain Grosjean, Felipe Nasr and Marcus Ericsson took evasive action by moving off the track. further back, Esteban Gutierrez was too focused on the contact ahead that he crashed into Nico Hulkenberg. Hulkenberg spun right back into Gutierrez. then, Rio Haryanto got sandwiched between Hulkenberg and Marcus Ericsson. this caused Haryanto to go airborne and Ericsson to get a puncture. in turn 3, Kvyat hit Vettel again. this time, Vettel spun off into the barriers. While the safety car came out to allow the Debris and wrecked cars to be cleared off the track, 5 cars went into the pits to repair damage- Daniil Kvyat, Daniel Riccardo, Sergio Perez, Esteban Gutierrez and Marcus Ericsson.

The order at the restart on lap four was: Rosberg, Räikkönen, Bottas, Massa and Hamilton, who had stayed clear of the incidents to move up to fifth. On the restart, Bottas moved ahead of Räikkönen, while Hamilton made a successful move on Massa into fourth. Kvyat's early pit stop left him in 15th at that point, and he soon served a ten-second stop-and-go penalty for his contacts with Vettel, dropping him to last. Meanwhile, Hamilton overtook Räikkönen to move into third on lap seven. Felipe Nasr came into the pit lane on lap 12 to replace a slow puncture on his tyres. The order at the front remained the same until Bottas became the first front runner to pit for fresh tyres on lap 17. Hamilton followed suit one lap later, but still emerged behind Bottas, overtaking him into turn two another lap later. On lap 20, Räikkönen made a pit stop as well, coming back out behind Hamilton, but ahead of Bottas. All the while, Rosberg led comfortably ahead of Max Verstappen, who made his first stop on lap 23 and dropped back.[23]

While racing for position on lap 23, Sainz forced Jolyon Palmer off the track in turn two and was later handed a ten-second time penalty for the incident. Four laps later, Pascal Wehrlein tried to overtake Felipe Nasr for 16th, but was unsuccessful and in turn lost a position to Kvyat. His teammate Ricciardo overtook Kevin Magnussen for eighth on lap 29, but lost the position again and was in turn passed by Romain Grosjean. As Nico Rosberg started to lap backmarkers on lap 31, the gap to second-placed Hamilton started to come down, with his advantage dropping from more than eleven seconds to a little more than seven seconds by lap 36. Meanwhile, Verstappen was forced to retire due to power unit failure on lap 34, while running in sixth place. As Hamilton was told by his pit crew that he suffered from a water pressure problem, his gap to Rosberg started to increase again, staying at 13 seconds by lap 41. Wehrlein made a pit stop for new tyres on the same lap, but problems with his stop forced him stationary for almost a minute, resulting in him moving into last place on the road.[23]

On lap 47, Massa made a pit stop for new tyres from fifth place, retaining his position ahead of Fernando Alonso. All the while, Räikkönen was able to close the gap to Hamilton ahead of him to eight seconds on lap 49. On the next lap, Button passed Sainz for tenth and Ricciardo moved ahead of Palmer for 12th another lap later. Rosberg crossed the line to take his seventh consecutive victory,[24] a feat to that point only achieved by Alberto Ascari, Michael Schumacher and Sebastian Vettel.[25] Lewis Hamilton and Kimi Räikkönen rounded up the podium ahead of the two Williams drivers, Valtteri Bottas and Felipe Massa.[23] Rosberg recorded the first Grand Slam of his career, meaning he won the race, recorded the fastest lap, achieved pole position and led every lap. He was the 24th driver in history to achieve the feat.[26]