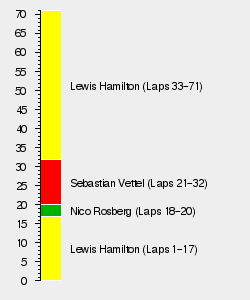 Lewis Hamilton took his first pole position at the circuit, being joined on the front row by his teammate and championship leader Nico Rosberg. Hamilton went on to win the race (and complete a sweep of the North American races!), with Rosberg coming home in second place, while Max Verstappen, Sebastian Vettel and Daniel Ricciardo made a battle for third place in the closing stages, eventually putting Ricciardo on the podium after Verstappen and Vettel were each given time penalties for different offences. The results reduced Rosberg and Hamilton's gap in the championship to nineteen points.