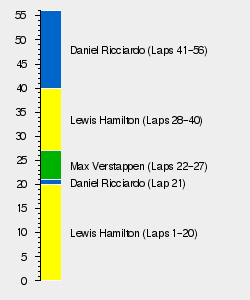 Mercedes driver Lewis Hamilton took pole position for the fourth time at Malaysia, with his teammate Nico Rosberg on the front row. Hamilton led the race from the start, but on the start of his 41st lap, his engine blew, causing him to retire from the race, and enabling Daniel Ricciardo to take victory and Max Verstappen to finish second, and championship leader Nico Rosberg finished third after a collision from Sebastian Vettel on the first lap put him at the back of the field, putting Rosberg twenty-three points ahead of Hamilton in the championship.

Nico Rosberg's win in the Singapore Grand Prix gave him enough points to take the lead of the Drivers' Championship from his teammate Lewis Hamilton, who could only finish third in the race. Afterwards, Rosberg led with 273 points, eight points clear of Hamilton. Daniel Ricciardo, who finished second in Singapore, was already far behind, 86 points behind Hamilton. Sebastian Vettel, despite finishing behind Kimi Räikkönen, was still fourth with 153 points, while Räikkönen was fifth and five points behind Vettel.[2] Mercedes led the Constructors' Championship with 538 points, being 222 points ahead of Red Bull thanks to the former's dominance. Ricciardo's podium finish and Max Verstappen's sixth-place finish kept Red Bull second, fifteen points ahead of Ferrari. Sergio Pérez's eighth-place finish resulted in Force India moving up to fourth, just one point ahead of Williams, whose drivers failed to score any points in Singapore.[3]

For the first time since 2000, the Malaysian Grand Prix was held in October rather than March or April. With the extra time, the track was resurfaced and had several upgrades to some of the corners, including to make the drainage at Turn 15 better than before so that there is not a huge amount of rainwater on the turn's entry and exit.[4] However, Vettel felt unsure if the track's resurfacing would improve the track itself.[5]

Soft, medium and hard tyres were chosen for the race, with the first appearance of the soft compound in the 2010s thanks to the regulations of 2016. Most teams chose seven sets of soft tyres, while others chose either six or eight. Jolyon Palmer was the only one of the drivers to choose four sets of hard tyres, while all the other drivers chose two or three. Hamilton was one of those to choose three, while Rosberg chose two, each alternating between their number of medium sets.[6]

On 28 September, the FIA revealed a provisional calendar for 2017 that includes the Italian Grand Prix after rumours that it might not be hosted again, although the provisional calendar had also shown that the Canadian, German and Brazilian Grands Prix were yet to be confirmed.[7] Felipe Massa, however, was concerned that the Brazilian Grand Prix may not be held, like how the German Grand Prix was not held in 2015.[8] Coincidentally, more rule changes for 2017 were confirmed, including to have standing starts in races that start during wet weather conditions.[7]

Before the Grand Prix, McLaren fitted new parts onto Fernando Alonso's power unit. Due to having gone over the limit of new parts allowed, Alonso was expected to take a grid penalty putting him at the back of the grid,[9] while Jenson Button revealed that his own car would not have any upgrades to its power unit that contain grid penalties for Malaysia and especially for his 300th start, and that McLaren were hoping not to take any grid penalties at their engine supplier Honda's home race in Japan.[10] Due to the penalties, Alonso stated that he would do only one short run in qualifying and get within the 107% time, as well as saving several sets of tyres for the race.[11]

Although he was close to fighting for the win in Singapore, Ricciardo did not feel that he would be very likely to fight for victory in Malaysia: "From the first view it's probably not our shot at a win - unless it rains, and then it is a whole different ball game. And I love ball games!"[12] Meanwhile, Hamilton was sure that he might be able to be back in the fight for the championship if he did better in Malaysia than in Singapore: "Just drive it better, I guess. More time on track. Hopefully we won't have any problems this weekend."[13]

Kevin Magnussen's Renault caught fire just after a few minutes in the first Free Practice session. The team confirmed the cause of fire as a fuel leak.

* Alonso was given a 45-place grid penalty for having elements of his power unit being unscheduled changed.[17]

Source * Alonso was given a 45-place grid penalty for having elements of his power unit being unscheduled changed.[17]

Three days following the race, Paddy Lowe explained that by the time he was saying it, they still had no idea what caused the engine failure on Hamilton's car while also investigating it.[19] One day later, the Mercedes team confirmed that the engine failure was due to crankshaft bearing failure, after the car's oil pressure suddenly dropped at Turn 15 on lap 40 without any warning. Responding to this, the team informed all of the teams with Mercedes engines to make sure they check the engine settings in the future, while Hamilton's car was fitted with the engine he used in Singapore.[20]

After the race, the stewards investigated Vettel's collision with Rosberg, and decided to give him two penalty points and a three-place grid penalty for Japan.[21] While Gutiérrez was not penalised for the loss of his tyre, his team was fined €5000, as the FIA mentioned "some function of the design, part failure or fitting allowed the wheel to come loose on the track, which is considered a serious safety issue", considering it an unsafe release.[22]

Nine Australian fans were arrested after having stripped at the Malaysian Grand Prix, being investigated whether they were insulting the country.[23]

Renault also announced that thanks to the drama occurring with Magnussen's car during free practice, they were to alter their fuel system's design in time for the Japanese Grand Prix.[24]