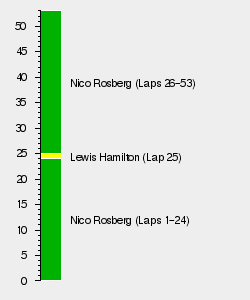 After Nico Rosberg won the Belgian Grand Prix with Daniel Ricciardo and Lewis Hamilton completing the podium, the gap between Hamilton and Rosberg in the Drivers' Championship was reduced to nine points, with Hamilton on 232 points. Ricciardo remained third, twenty-three points ahead of Sebastian Vettel, who overtook Kimi Räikkönen in the championship despite them both finishing outside the top five in Belgium.[2] Mercedes was once again the leader of the Constructors' Championship, with 455 points. Ricciardo's podium kept Red Bull ahead of Ferrari, leaving both of them separated by twenty-two points. Force India's double points finish in the top five put them ahead of Williams, who only received five points in Belgium.[2]

In the Belgian Grand Prix, Magnussen received an injury to his ankle when his car crashed heavily into the tyre barrier during the race. However, he was still confident that he was fit enough to compete in Italy.[3]

On 1 September, Williams driver Felipe Massa gave news that was surprising to some, that 2016 would be his last year in F1 and Abu Dhabi would be the last time he has taken part in a Grand Prix. However, he ended up retaining his seat at Williams in 2017 due to Nico Rosberg's retirement, which caused Mercedes to sign Valtteri Bottas [5][6][7]