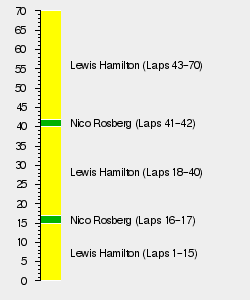 The first qualifying session had four red flags, one due to heavy rainfall, and the other three due to accidents from Marcus Ericsson, Felipe Massa and Rio Haryanto. Throughout the first two qualifying sessions, due to the mixed weather conditions, the results had drivers such as Felipe Nasr being temporarily in the top ten before he fell down to sixteenth in Q2 as the track was drying since the final minutes of Q1. The final qualifying session started with Lewis Hamilton fastest at the time, but as the session ended, Nico Rosberg snatched pole position, while Hamilton was unable to improve due to having slow down under yellow flags. However, in the race, Hamilton took the lead at the first corner, and went on to take victory and the championship lead, while Rosberg and Daniel Ricciardo completed the podium.

Following the British Grand Prix, Nico Rosberg was still leading the Drivers' Championship with 168 points, though only one point over Lewis Hamilton, following Hamilton's win in Britain and a time penalty for Rosberg putting him down to third in the race. Sebastian Vettel's ninth-place finish in Britain led to Kimi Räikkönen and Daniel Ricciardo both overtaking him in the standings. Räikkönen was 62 points behind Rosberg, while Ricciardo was another six points behind. In the Constructors' Championship, Mercedes led with 335 points, 131 points ahead of Ferrari. Red Bull were third with only six points behind Ferrari, while Williams were far behind with 92 points after failing to score points in the British Grand Prix. Force India followed with 73 points.[2]

As per what was mentioned in an announcement before the Austrian Grand Prix, Charles Leclerc competed in FP1 for the Haas team.[3] Also competing in FP1 was Esteban Ocon for Renault, following his good runs for Mercedes in the in-season test at the Silverstone Circuit the previous week.[4]

Medium, soft and supersoft tyres are to be used for the Grand Prix, marking the first time the supersoft tyres are used at the Hungaroring. Ferrari chose nine sets of supersofts, while other teams chose either seven or eight. Sergio Pérez, Nico Hülkenberg and Esteban Gutiérrez were the only drivers to choose two sets of medium tyres, as the rest of the drivers chose only one set.[5]

Meanwhile, Sauber announced that their financial problems were being solved by Longbow Finance S.A. buying the team. Ironically, the team did not change their name or flag, and kept Monisha Kaltenborn as their team principal, although Longbow Finance S.A.'s President and CEO Pascal Picci replaced Sauber's founder Peter Sauber to be Chairman, while Peter himself announced he was retiring.[6]